Colleges, cakes and more for campers in Cambridge

Blossom, tea, scones and sunshine: students at the University of Cambridge have been enjoying this heady mixture in nearby Grantchester. 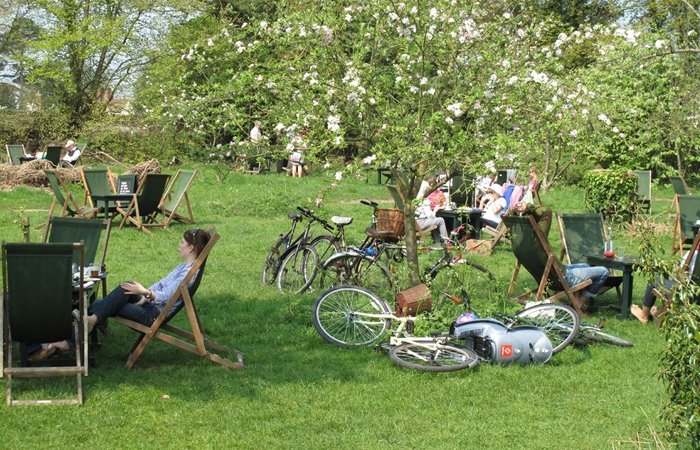 Claudia Dowell and daughter Amber share their tea heaven
My daughter Amber and I were spending a couple of days in Cambridge on the way back to London. But before we explored this beautiful, historic city that's home to one of the world's oldest and most famous universities, we needed a cuppa to set us up for the day.

A friend of Amber’s had given her a list of Cambridge must-sees and one of the top tips was to enjoy the restorative power of tea, taken in the Orchard Tea Garden in Grantchester. The friend wrote:

“This is a lovely tearoom where, if the weather is good, you can take high tea under apple blossoms. Grantchester is a very picturesque village just south of Cambridge, and you can walk to it along the river from Newnham (also very pretty, with lots of Victorian terraces). First World War poet Rupert Brooke lived there, too, and there is a pool just outside it where Romantic poet Lord Byron famously bathed in the summer.”

These were all excellent reasons to visit – and we weren’t going to wait until the afternoon! Skipping breakfast we set off from our pitch at Cherry Hinton Caravan Club Site and arrived at the Grantchester tearooms at around 10.30am, parking in the road as the car park was already full. Our visit was in April and the orchard was a picture of pink and white blossom decorating gnarled, elderly fruit trees. In the dappled sunlight beneath the trees, groups of folk armed with refreshments and Sunday papers sat in green deckchairs clustered around tables. We followed the path to the wooden teahouse and joined the short queue of people assembled in front of the biggest scones I’ve ever seen.

Equipped with a tray of tea, scones and jam for two, we found a spot in the spring sunshine and settled down to read all about The Orchard's history. It began life as a tea garden in 1897 when a group of Cambridge students, who regularly visited Orchard House for tea, decided they would like it served in the orchard rather than on the front lawn of the house. It soon became a favourite haunt for students. Orchard House also served as lodgings and in 1909 a King's College graduate, Rupert Brooke, moved in. For five years the young poet drew many visitors to the house and orchard, establishing a circle of friends that included the authors EM Forster (Passage to India, Howard's End, A Room with a View) and Virginia Woolf (To the Lighthouse, Mrs Dalloway, A Room of One's Own), and the Post-Impressionist painter Augustus John.

It would have been so easy to spend the day lingering in this gorgeous setting but the scones were scoffed, the tea guzzled and Cambridge beckoned. We left the car where it was and walked into the city through Grantchester Meadows, meandering alongside the River Granta, which was populated with people in punts looking for places to pull in where they could spread out their picnics.

The walk into the centre of Cambridge is around two and three-quarter miles and by the time we got there I was ready for further refreshment – well, it was lunchtime, after all. We referred again to the helpful email from Amber’s friend.

"I’d recommend Indigo. It's a tiny coffee shop on St Edward's Passage, just off King's Parade, which does bagels and other sandwiches, and big mugs of coffee. There’s usually a good musical soundtrack, and it is next to a lovely second-hand bookshop."

The place is, indeed, tiny: food is ordered downstairs and then you find somewhere to sit upstairs. I left the ordering to Amber while I tackled the climb to the first floor. Lunch was delicious and wholesome, and with another cuppa dispatched we were ready to be awed by Cambridge’s handsome buildings.

During holiday time the university’s students supplement their student loans by selling tickets to visitors to take part in the local sport of bumper punts along what is known as the Cambridge Backs – the rear views of the colleges from the river. We paid £20 for a ride for two on one of the largest punts on the river.

Once on board, battle commenced. “Who knows which is the oldest university in England?” asked the Kiwi captain of our boat, trying to engage his punters, while dodging other punts full of tourists. According to our knowledgeable New Zealander, several of the colleges were founded by women, which Amber found rather ironic as women were only admitted as students to the 800-year-old university comparatively recently. They were permitted to study and sit examinations in the late 19th century but women were not granted degrees until 1921. With someone else doing all the work, the rather fun game of river dodgems was entertaining, but it was over too soon.

Back on dry land we wandered along the fronts of these palaces of education: they really are very beautiful buildings with grand gates and fine lawns. Peterhouse, founded in 1284, is the oldest Cambridge college and looks exceedingly venerable.

We passed one or two lovely churches, too, including St Botolph’s Parish Church.  St Botolph was a 7th-century abbot who is the patron saint of travellers.

We two travellers were running out of steam again and in need of another brew. We decided to combine it with a spot of self-improvement and popped into the Fitzwilliam Museum, a grand, pillared building. We only had time to see a little of the collections en route to and from the café, but we will definitely return in the future to devote more time to it.

It was past 5.30pm and we still had the long walk back to Grantchester for the car, which meant crossing the river and a park before once again passing through Newnham and then Grantchester Meadows. It had been niggling me why the name was familiar. Then it came to me, Grantchester Meadows is the title of a track on a Pink Floyd album Ummagumma, released aeons ago (1969). It starts off with birdsong and the chorus goes:

Hear the lark and harken to the barking of the dog fox gone to ground.
See the splashing of the kingfisher flashing to the water.
And a river of green is sliding unseen beneath the trees,
Laughing as it passes through the endless summer making for the sea.
(Complete lyrics to Grantchester Meadows are here)

It was written and performed by Pink Floyd's Roger Waters, who had clearly made the same walk as us, and Rupert Brooke. Grantchester really is a lovely, relaxing place. You must go there for tea sometime!

Where to stay for a trip to Cambridge

Here is Caravan Sitefinder's selection of campsites and holiday parks near Cambridge:

View 34 campsites near Cambridge on a map on Caravan Sitefinder 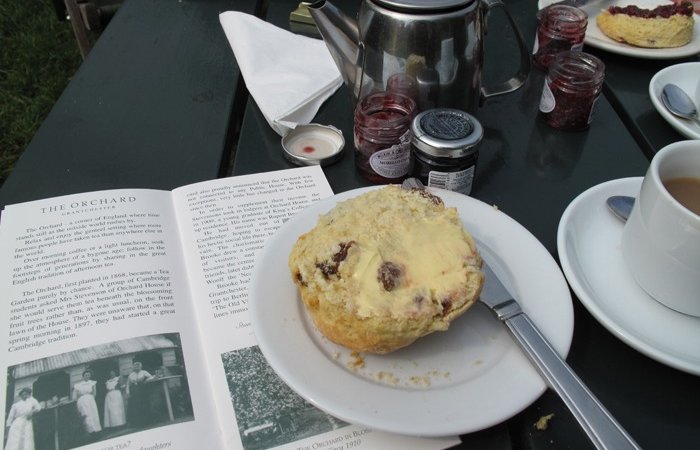 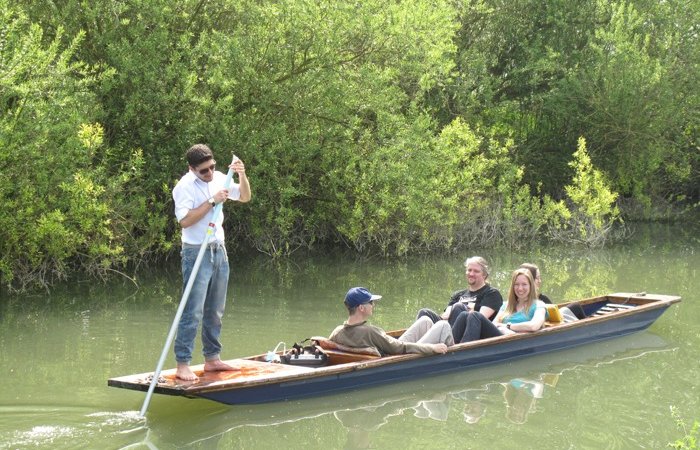 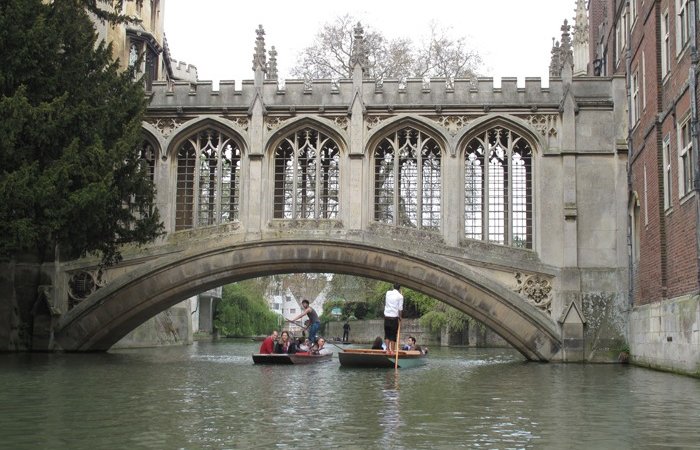