Claudia Dowell guides you to the best campsites in Hull, and reveals why it deserves to be the UK City of Culture for 2017. 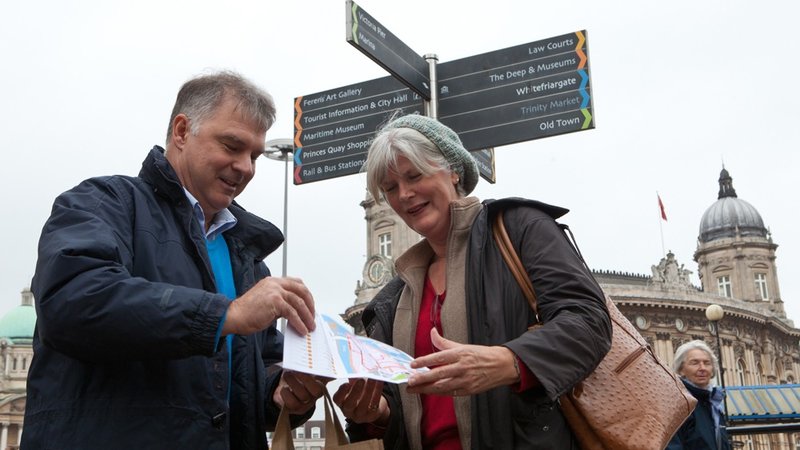 Hull being named UK City of Culture 2017 may have  come as a surprise to some people,  but an exploration of the city's old town will soon put aside any wonderings about the choice.

I visited Kingston-upon-Hull, or Hull, as it is more commonly known, a couple of years ago at the suggestion of a friend, who had been to university there. My friend was right:  Hull is so much more than a caravanner's gateway to the Continent and winter sunshine.

The city sits on the banks of the River Humber where it is joined by the River Hull. It has a long history as a port, despite being 20 miles from the sea. Many of its more illustrious buildings support this trade, which began in the 12th century, when monks exported wool to Belgium and Holland. Other important industries were fishing and whaling, and the place produced a few prominent citizens, too.

The tourist information centre is a great place to start when time is limited, and colleague Nigel Hutson and I found Hull's in City Hall on Victoria Square. We left there armed with a map of the Fish Trail, which the city commissioned from artist Gordon Young for its 1992 festival. Following this route turned out to be a great way of taking in the main sights around the city's Old Town.

The trail kicks off with a school of anchovies on the pavement outside City Hall and opposite a statue of Queen Victoria, which sits regally in the middle of Victoria Square on top of Hull's award-winning conveniences. 'Another take on Queen Victoria sitting on the throne‚' quipped the chap from the tourist office, who we'd persuaded to point us in the direction of the anchovies when we couldn't find them. We spent the morning scanning pavements, walls and windows for the elusive fish. We were excited when we did spot one, but in the main became thoroughly frustrated when we didn't.

Our irritation over the scaley Houdinis also meant that we missed some of the subtle humour in their placement, which was pointed out to me the following day on another trail. For example: outside the bank was a shark; in the timbers of Victoria Pier overlooking the Humber was an umber; and alongside an electricity substation was an electric eel. The map did prove handy, though, and had notes on some of the city's significant buildings and areas.

We were three fish into the trail when we came across the Beverley Gate, one of the city's 14th-century entrances, said to have figured in an event that started the English Civil War. Relations between Charles I and Parliament had deteriorated. Hull had arms and ammunition left over from the Scottish war, and the king wanted them. But Governor Sir John Hotham, who had been appointed by Parliament, refused the king entry to the city, thus putting Hull firmly in the camp of the Parliamentarians.

Show me the light

Behind Beverley Gate is Princes Quay Shopping Centre, a glass retail Mecca overlooking water where there was once a dock. Shopping wasn't on our agenda, and we gave up on fish number four‚ which was supposed to be in the area, and skipped fish five-to-10 so that we could mosey on to Hull Marina instead.

Several boats bobbed around the marina, but the most important was moored against the quay. The Spurn Lightship served as a navigational aid for shipping in the Humber Estuary for nearly 50 years. Moored 4.5 miles off Spurn Point, its light could be seen from 11 miles away, and helped guide ships through the Humber's treacherous waters. You can visit the ship during peak holiday season or when the city hosts maritime events and festivals. Call the council on 01482 300 300 to check when these are, or visit the Spurn Lightship website for more info.

Still scanning the pavement for fish, we noticed a pattern of brickwork along the promenade, which marked where the medieval city walls once stood. We abandoned the Fish Trail altogether and crossed back over the busy A63, walked up Fish Street, and found ourselves in Trinity Square in front of Holy Trinity Church. Its cathedral-like proportions date from the 14th century and it is England's largest parish church by area.

Another venerable building, the Old Grammar School, sits opposite Holy Trinity on South Church Side. This now houses the Hands On History Museum, which is open daily from 10am-5pm.

One or two museums

From Trinity Square we wandered through the streets of Hull's Old Town, an area of narrow alleys, quirky buildings and ancient pubs that mercifully escaped the terrible bombing the town endured during World War II – it was the most bombed city after London. During medieval times the most important street in Hull was the High Street, where the Museum Quarter is located. Children and adults alike will love the Streetlife Museum of Transport, packed with cars, carriages, trains and trams depicting the evolution of transport on Britain's streets. You can climb aboard an old tram and even take a simulated carriage ride.

The Streetlife Museum of Transport has a fascinating collection of old cars, trams, trains and carriages

We popped into the Hull and East Riding Museum, which depicts life in the area dating back to prehistoric times. It's astonishing that the wonderful Roman mosaics displayed there have survived to this day. It also has Britain's largest prehistoric logboat and a woolly mammoth.

Wilberforce House contains the fascinating, if grim, history of slavery in the British Empire and William Wilberforce's role in its abolition. If this interests you, allow time for it because there is a lot of reading to do. There's a very moving statue in the garden of a slave and lion.

At the confluence of the rivers Hull and Humber is Sammy's Point, marking what was once a 19th-century shipyard. Since 2002, it has been home to one of Hull's biggest attractions. An extraordinary building houses one of the world's deepest aquariums. Called The Deep, it reveals the treasures of the world's oceans and rivers and helps in their conservation.

A visit to The Deep starts at the top of the building with a walk through a series of zones, beginning with an explanation of oceans and their origins. The trail leads through a lagoon area, which is populated with corals and brightly coloured fish, past a tank of jellyfish to the 10m deep ocean tank, which is home to sharks, stingrays, sawfish, Moray eels, the poisonous long-horned cowfish and all manner of creatures that look as if they belong on another planet. While we were there, several divers entered the lagoon tank to clean it, and it was interesting to watch the fish react. We took the lift up through the tank and walked through its glass tunnel, which gave us a fish-eye view of the ocean surroundings. We spent a good couple of hours in The Deep and could have stayed longer.

Parking here is easy and costs £3 for the day. The car park can even accommodate car and caravan or motorhome, so it makes a great stop-off if you have time before catching a ferry from Hull. The glass nose of the building houses a café that serves a good lunch as well as hot and cold drinks, and there is a shop. I was impressed.

We had packed a lot into the day and it was time for Nigel to leave. He sent me an email several days later saying he was surprised by how interesting Hull is:  'It was wandering around the little back streets of the Old Town that I enjoyed most. And The Deep was amazing. The fact that I would really like to return and spend some time there says it all.'

You bet it does.

Aside from the Fish Trail, the Hull tourist office provides a map of a Philip Larkin trail. It can also arrange a guide. So the next day I met Paul Schofield in the lobby of the Mercure Royal Hotel, next to Paragon Railway Station. He was going to show me the haunts of Mr Larkin, librarian at Hull University for 30 years and arguably Britain’s greatest postwar poet.

Larkin was clearly passionate about Hull, which features regularly in his poetry. Larkin used The Royal Hotel frequently for meetings, dinners and drinks. In fact, it is the
only Hull landmark specifically mentioned in one of his poems, ‘Friday night in the Royal Station Hotel’. You can listen to my guide reading the poem on www.thelarkintrail.co.uk/city-centre.

On the station concourse is a slightly larger-than-life bronze sculpture of the poet dashing off to catch a train. Next stop was Victoria Square. City Hall was an important venue for Larkin, who attended jazz concerts here and had some of his own work performed. Then it was on to the Land of Green Ginger, a curiously named street that is home to The George pub and England’s smallest window — so small it had to be pointed out to me. The trail continues through the Old Town, taking in places important to Larkin: the pier, pubs, jazz venues, the old market and elegant streets. Each of the trail’s plaques bears Larkin’s poetry. The pieces were well chosen and I, for one, felt inspired to read more work by Hull’s adopted son. 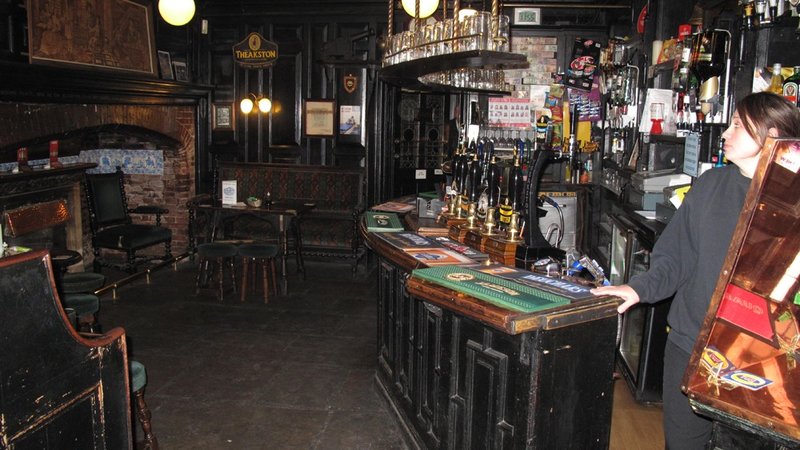 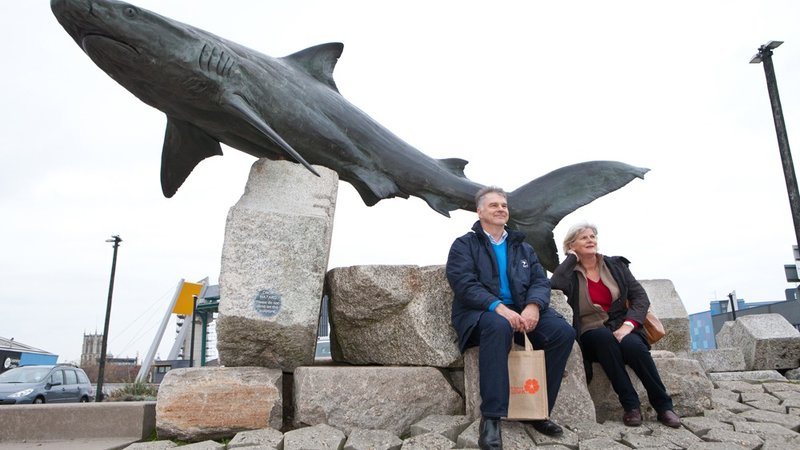 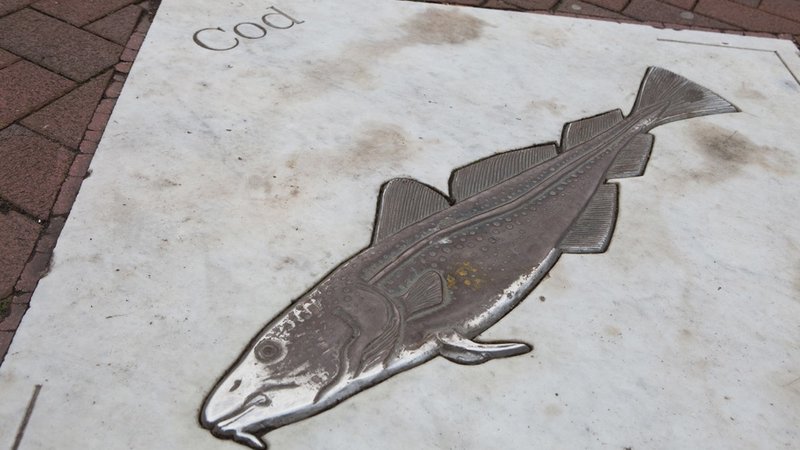