Free your wild side in Western Ireland

For me, a keen photographer based in the Wirral, a trip to the enigmatic area of limestone pavement on the west coast of Ireland seemed like an opportunity too good to miss. It’s a fantastic area to explore in a motorhome and has breathtaking scenery. 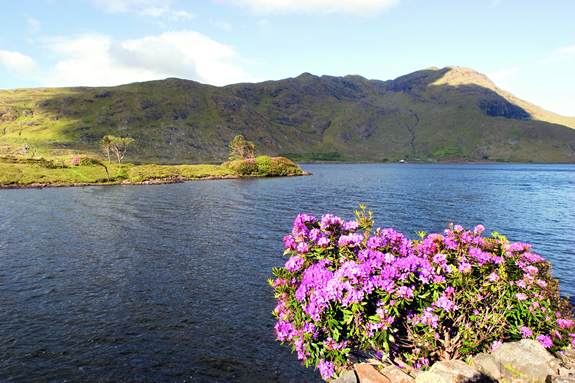 As you drive around, you can’t help but marvel at the variety of sights

So my friend Robert Devenish and I set off for a week-long tour, mostly wild camping in my Elddis Firestorm.

There are several different ferry crossings to Ireland but we chose to use Irish Ferries as the journey takes only three hours 15 minutes from Holyhead.

Another reason for choosing Holyhead was that I wanted to visit my uncle’s grave in the cemetery there. His name was Edward Lewis and although I never got the chance to meet him (he died on the submarine HMS Thetis at the age of 29), my middle name is Edward in his honour.

After disembarking in Dublin we headed for the west coast and The Burren (the Gaelic word boireann means ‘great rock’) some 130 miles away. The journey across the country was on almost traffic-free roads, through some rather bland landscape, until we reached Galway Bay when the scenery was stupendous for the rest of our journey. Our first wild camping site that evening was on a small stone quay at Bell Harbour, at the end of a tidal bay. We were lucky enough to have it all to ourselves and we both slept like logs that night. We did see a number of signs at The Burren, warning about overnight camping, and threatening a large fine. Nevertheless, we made some enquiries in the village of Ballyvaughan, where we met a delightful couple, Geraldine and Jim. She ran the local tourist information office in the village while he ran the local Spar grocery. Jim alleviated our fears when he told us that the warning signs about overnight camping were most likely aimed at discouraging travelling communities and suchlike.

The main reason for our visit was to explore the large area of limestone pavement, famous for its clints and grykes (weathered blocks of fissured limestone).

We discovered a good location on the coastal strip at Black Head where there was easy parking. There, the limestone pavement runs down to the shoreline of Galway Bay, and the grykes are easily accessible.

The following day, we decided to explore the sand dunes at Fanore – with its attractive beach and unusually coloured sand it is a very attractive area.

On our way back to Ballyvaughan we spotted a little quay outside the village and got some nice shots of rock pipits feeding on sand flies and small crustaceans. The photographic result was well worth the detour before we headed back to our wild-camping spot at Bell Harbour. The next morning we decided to take the coast road south to the popular tourist attraction, the Cliffs of Moher.

The cliffs are 214m at their highest point, and some 8km long. It is worth spending a few hours walking along the top and taking in all that wonderful sea air. Also, the visitor centre is quite unique in that it is built into the side of a hill, in sympathy with the topography of this area of County Clare.

On our return journey, we tried in a number garages and shops to find a replacement gas bottle, as ours had run out the previous evening. But we were out of luck because this area of Ireland seems to favour Continental-style bottles.

However, just outside Ballyvaughan we came across the proprietor of a local service station who turned out to be very knowledgeable about motorhomes – he had built his own from scratch – and he advised us that the only way we would be able to get more propane in this area was to have our own bottle topped up at the main dealer. The nearest one was just outside Galway, so the following day we headed off to Galway Bottled Gas (tel 0872 714 664), paid €16 (£12) and were on our way again.

Heading back to The Burren, this time by a different route, we took the N59 to the coastal town of Clifden where we wild camped for the night, overlooking the entrance to the harbour. 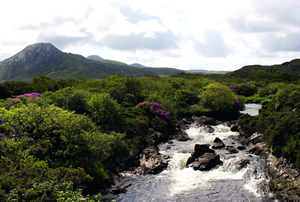 The River Dawros, with Connemara’s 12 ‘Bens’ in the background

Clifden is a picturesque town and an excellent base from which to explore the Connemara National Park (www.connemaranationalpark.ie) as it is only ten miles from the park’s perimeter.

Neither of us felt like cooking that night so we walked into Clifden and had a lovely meal in one of the local restaurants. We enjoyed locally-caught oysters, washed down with pints of ‘the black stuff’. After this delightful meal, we popped over the road to a local pub. The place was jumping. Music filled the air and two young couples performed traditional Irish dances. It turned out to be a really tremendous evening.

The next morning we took the N59 road out of Clifden and headed north, towards Kilary harbour. On the way there, we discovered a beautiful location just outside the village of Letterfrack, on the River Dawros. It was a delightful spot with thousands of orchids and the spring lighting was gorgeous. It even had its own resident grey wagtails which were feeding on the caddis flies.

On our way back to Clifden we spotted a small caravan site, just outside the town, called Shanaheever Camping and Caravan Park, so we chose to have just one night enjoying the luxury of mains hook-up and all the other usual campsite facilities.

The following day we decided to explore the Connemara National Park more thoroughly. We found it to be a lovely part of the country, with many facets to its landscape. In springtime the whole area is festooned with rhododendrons. 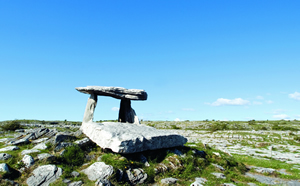 A burnet rose; the Poulnabrone Portal.

Our campsite that night was on Lough Fee where I was able to catch some pan-sized, wild brown trout for our breakfast. They went down a treat and were particularly appreciated by my friend Robert, who had never before tasted the fish, fresh from the water. After breakfast, we returned to The Burren because Jim and Geraldine (whom we had met earlier, at Ballyvaughan) had invited us to attend a barbecue on the Saturday night at a nearby hotel. We drove along the R340 coast road which has some beautiful scenery along its route. Some of the white sandy beaches reminded me of the Hebridean landscape of North Uist with its many inlets, creeks and small lochans.

That night, we camped outside Ballyvaughan, just a short walk from the hotel where the barbecue was being held. We had a great night and were treated to some fine, Irish hospitality. In the morning, following a tip from one of the locals, we made an early start to look for otters in the Rine Peninsula. Our friend said he had often seen them feeding, early in the morning. Sadly, though, we didn’t spot any.

In the afternoon we drove to one of the world’s most visited dolmens (prehistoric stone ‘tables’), the Poulnabrone Portal, 8km south of Aillwee (signposted from the R480 road). When it was discovered, the remains of 20 folk from 4500 years ago were also found. 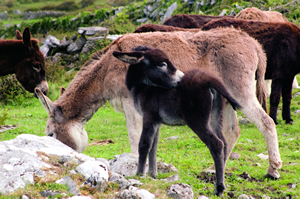 A herd of black head donkeys

Our final wild camp of the trip was at a pleasant location, Caislean Sean, at Muckinish, a ruined tower on the coast, outside Ballyvaughan, a few miles from the N67. It’s strange how things work out. We hadn’t planned to visit Connemara National Park, yet it ended up being the highlight of our trip.

Ireland is a superb touring destination but the thing that stood out above all else was the hospitality and friendliness shown to us by the locals. I recommend you add Ireland to your list of places to visit.