New Forest: If you go down to the woods...

The curious thing about the New Forest is that it isn’t very new, and it isn’t really a forest.

It was created in 1079, when William the Conqueror decided he needed grazing grounds for his deer, and is only a forest in the medieval sense – a cordoned off area where animals could graze. 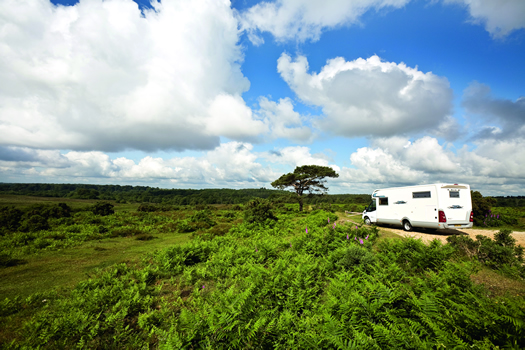 It was picked not for its cultivability, but for precisely the opposite reason – the Forest stands on infertile ground that makes it unsuitable for agriculture. This was the exact opposite of my first impression of it, though, because to my unschooled eyes it appeared to be incredibly fertile.

Entering the Forest from the east, I followed the A31 and then turned north towards the town of Ringwood. I decided to explore before finding my overnight stop. There was a pretty stream close by called Dockens Water, which I followed into the woods. I soon emerged onto a scrubby hillside dotted with trees, and crested it to find a plateau before me, covered with a maze of bushes. I spent an hour wandering over and around it watching cheeky-tailed rabbits scamper out of my way. This is what I fell in love with about the New Forest – it’s a perfect place for aimless wandering. As I mentioned earlier, however, this apparent lack of order is deceptive, because the New Forest has always been a highly regimented place.

Ever since William annexed the area, local inhabitants have been subject to Forest Law, originally an oppressive code designed to safeguard the royal stock of deer at the expense of the locals’ livestock. Since then the Forest has been the subject of a tug-of-war between local residents (called ‘Commoners’) and the crown. The Commoners have come a long way since 1079, and now have a great deal of control over the Forest.

Wandering downhill by a different route, I came across a car park with a sign showing that the place I had just visited was called Rockford Common. It was also near this car park that I came across my first New Forest pony.

The ponies are one of the Forest’s hallmarks – like the Forest itself, they may seem wild, but they are in fact owned by the Commoners.After my first night I woke to a dazzling sunrise and, after breakfast, I motored towards Lyndhurst. On the way I passed through the open spaces of the heathland, and stopped for a while in the Stoney Cross car park, sitting to watch the cattle, deer and ponies grazing on this former RAF airfield. Then I headed for Lyndhurst, a bustling town in the centre of the Forest where I stopped for a bite to eat. Even though Lyndhurst is a lovely place full of pleasant shops and cafés, I soon felt a yearning for the Forest, and drove towards two famous scenic routes nearby. 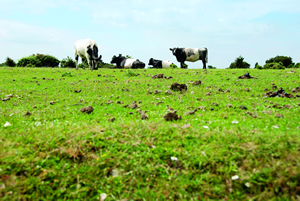 Stoney Cross Plain was once an RAF airfield, but now the wide-open spaces have been reclaimed by the heathland and by these contentedly grazing cows.

The Rhinefield and Bolderwood Ornamental Drives run to the west of Lyndhurst, through the woods, from the village of Brockenhurst in the south to the A31 in the north. They are a must for anyone visiting the area. The mossy tree trunks, dappled forest floor and lingering mist seem like something straight out of Tolkien. If you have the time, it’s more fun to do these routes on foot or with bicycles (which can be rented in Lyndhurst).

The next morning, I decided to forgo the pastoral theme of the last two days and seek out some industry. Due to its location on the edge of the Solent, and its plentiful supply of timber, the Forest has long played host to shipbuilders. The artery of the New Forest’s shipbuilding past is the Beaulieu River, which originates near Lyndhurst and passes through the village of Beaulieu, on its way to the Solent. Beaulieu itself is the stuff of postcards, full of cobbled streets and ivy-clad buildings. Its most prominent landmark is Palace House, which started out as the gatehouse to Beaulieu Abbey in 1204, and now houses the excellent National Motor Museum. Beaulieu is a marvellous place for a walk, particularly by the river, where you can contemplate the stately Palace House from various vantage points.

A couple of miles downriver is the picturesque hamlet of Buckler’s Hard, the focal point of the New Forest’s shipbuilding history. Buckler’s Hard is made up of two brick terraces facing one another across a slope, which descends to the river. These were shipbuilders’ homes in the 18th century, and vessels were built between them, with timber from the Forest, and then rolled down the slope to the waterside. Wandering around by the river, I came across a bench right at the water’s edge where I sat to take in the views out over the estuary, with its healthy population of yachts.

Then it was time for a pint at the Yachtsman’s Bar and Galley, the only pub in Buckler’s Hard. The walls are festooned with maritime mementos, and on one I spotted a list of ships built in Buckler’s Hard, including many that were part of Admiral Nelson’s Armada.

Just next door to the pub is St. Mary’s Chapel, a tiny old shipbuilders’ chapel that has on show an altar cloth embroidered with the names of ships built in Buckler’s Hard and eventually lost at sea.

The New Forest’s legacy of marine warfare didn’t come to an end with the ships of Buckler’s Hard, though. I drove to Lepe Beach next, about six miles south-east of Beaulieu, along roads that are narrow, but completely navigable with a bit of forward-thinking. 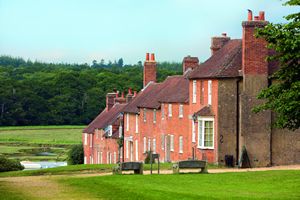 The terraced houses of Buckler’s Hard

Lepe Beach is just outside the boundaries of the national park, but is certainly worth a visit to experience its views over the Solent and its fascinating history. During WWII, Lepe was one of the staging points for Operation Overlord, which began with the D-Day Landings.

I picked up Hampshire County Council’s ‘D-Day at Lepe’ leaflet from the information centre near the car park, which served as an excellent guide.

The beach was packed closer to the car park, but the crowds thinned as I walked towards the D-Day ruins. I came across crumbling platforms, slipways and pier heads used to construct segments of the floating Mulberry Harbour caissons that were towed across the Channel in the wake of the D-Day invasion force, and assembled on the French coast to keep the troops supplied.

I sat down on one of the bollards once used as mooring points, and watched as the sun descended over the Solent. The shadows of the wartime ruins lengthened, and I thought about all the seemingly wild and untouched parts of the Forest that I’d come across. During the war they’d teemed with tanks and troops, readying for the big push. Now, the airfields are overgrown and most signs of the young men who awaited their destiny there are gone, but the New Forest endures as though unchanged.

Its defining feature is that its wildness is retained not in spite of, but because of, a long entanglement with human affairs – one that persists to this day.