Warwickshire is a beautiful county and an example of real Olde England so we set out to explore the area, taking in Warwick, Coventry and Stratford-upon-Avon. 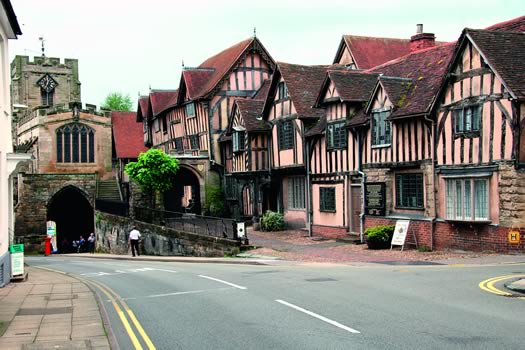 Our first point of call was Coventry which has been a world centre for many things over the years. Almost 90 motorcycle and over 130 car manufacturers set up base here, all eager to make use of the empty workshops and the skilled labour force available after the demise of the city’s watch and ribbon industries. Firms such as Rover, Daimler, Triumph and Standard all became synonymous with the city. Sadly, most have since left.

To explore the city, we headed for one of Coventry’s park-and-ride facilities at the War Memorial Park. After a short bus ride we spent a couple of hours browsing in the shopping area before visiting the Museum of British Road Transport.

Most visitors to Coventry flock to see the cathedral and the surrounding area, so that was our next destination. Heralded as an architectural classic, the cathedral of St. Michael was built alongside the ruins of the old one, which was devastated during WWII.

The shell now offers a peaceful place to sit and reflect. Under the east window stands a simple cross made from the remnants of charred roof timbers. The inscription simply reads: “Father Forgive”. Steps lead from the ruins to the Sir Basil Spence-designed new cathedral built in 1962 and the difference between the two is breathtaking.

Alongside the cathedral is St. Mary’s Guildhall, which has stood at the heart of the city for 650 years. Mary, Queen of Scots was imprisoned here, Shakespeare performed plays here, and, a year or two later, we had coffee in the 14th-century undercroft (or crypt).

Nearby, cobbled lanes lead to the Holy Trinity Church. This impressive building survived the war as did the surrounding timber-framed houses of Priory Row, which date back to 1550.

We then drove to Ryton Organic Gardens. The ten-acre grounds are designed to work in harmony with nature and are a favourite destination of Prince Charles, who is the gardens’ patron. 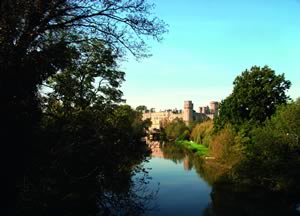 Next, we set off for Coventry airport and the Midland Air Museum. Within the main hangar there are a number of displays including ‘Wings Over Coventry’ and the ‘Sir Frank Whittle Jet Heritage Centre’. Here, Sir Frank Whittle’s jet engine is shown in an animated display, along with many other civilian and military aircraft, missiles and artefacts.

We finished the day with a look around Hatton Country World. It’s a great family attraction where children can get up close to farm animals and enjoy the adventure play area. However, we were there to take the nature trail to the renowned Hatton Locks, otherwise known as ‘Stairway to Heaven’. It’s a lovely walk that follows the Grand Union Canal as the 21 locks drop the canal 146 feet over two miles. We then enjoyed a much deserved drink and meal at the Waterman canal-side pub.

Later, we strolled into Warwick. We met the main road at West Gate, which is said to be the site of the Great Fire of 1694. At the time, the narrow streets and timber frames meant that much of the centre was lost in a matter of hours. Adjacent to the gate you are greeted by the 14th-century row of half-timbered buildings of The Leycester Hospital.

Most of our day, though, was taken up with exploring Warwick Castle which, although pricey, turned out to be great value. From Warwick Castle, we headed to Stratford Touring Park. We arrived late and appreciated a hot shower before retiring, ahead of yet another packed day. The following day we again walked from our site into town. Millions of people visit Stratford-upon-Avon every year, from all over the world. And, arguably, all because of one great man: William Shakespeare. 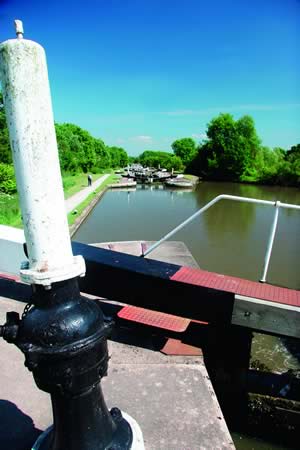 Most people head for the half-timbered house in Henley Street which was said to be the Bard’s home during his formative years. Care has been taken to equip the house with furniture of the period, while the superb garden has the herbs, flowers and trees mentioned in the playwright’s works.

In the afternoon, we ventured across the River Avon, making for the Butterfly Farm which claims to be Europe’s largest. It was fascinating seeing these brightly coloured, exotic ‘flying machines’ darting around our heads.

That evening, we attempted to scare ourselves silly at the Falstaff’s Experience at Shrieve’s House and Hall. The house claims to be the oldest lived-in property in Stratford and the attached 16th-century hall houses a museum depicting the building’s chilling history. The hall is said to be haunted, and ghost tours take place daily from 6pm. Ghost-hunting vigils run from 10pm at the weekends.

After a restless night’s sleep we left for Shottery to have a look at Anne Hathaway’s cottage before driving through the town and over the 15th-century Clopton Bridge to the National Trust’s Charlecote Park with its Tudor house and landscaped deer park.

We were then homeward bound. All in all, a fun-packed short break in Shakespeare’s wonderful country.