Enjoy the rich diversity of experiences to be had in the south of the Lakes. Jennifer Stuart-Smith reveal what to do.

Strangely, considering its name, most people associate the Lake District with walking and mountaineering. But what about the lakes themselves? The South Lake District is dominated by Windermere while, nearby, Coniston Water nestles at the foot of the Langdale and Scafell Pikes. 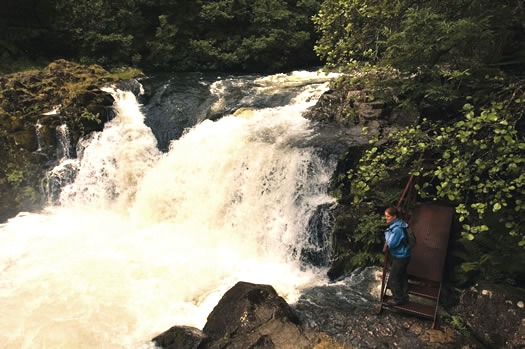 Among the lesser known lakes is Esthwaite Water. Surrounded by gently sloping meadows and the occasional farmhouse, this is a favourite with anglers thanks to its stock of organic trout. So what better way, we thought, to enjoy the peace and quiet of the Lakes than to try a spot of fishing?

Fly fishing looks so relaxing, particularly as it is most commonly done from the banks of unspoilt rivers or the pebbled beach of a lake. All I needed was a fising rod, tackle and some teaching of the basics. I hired the kit and signed on for a lesson at Esthwaite Water Trout Fishery. The company caters for all levels, so I felt quite at home as we motored out quietly across the water for my lesson. Ian, my tutor for the afternoon, had got a tip that there were plenty of fish on the far shore, so we drew up, pulled the boat ashore, and the lesson began.

Casting looks so easy to do, but it left me all fingers and thumbs. It took me a while to learn how, but Ian showed endless patience. He still gets a thrill from fishing, and, thankfully, from teaching as well. “I could never get bored of this,” he says, casting the fly out over the water. Then it was my turn to have a go again, following his lead.

I had guessed that fishing could be relaxing, but I’d never realised it was exciting, too. Every now and again we would see or hear a trout jump out of the water, not far away, but had no bites. Eventually there was a tug on the line and my heart jumped. “Reel him in gently,” said Ian, standing beside me. “And when he starts to run, let him have some line.” It’s a subtle art. Gradually the trout came in nearer, started to tire, and Ian went in with the net. “Well, he’s a rainbow trout and about one and three quarter pounds in weight,” he said when we’d taken the fish from the water. “Do you want to hold him for a picture?” Here was my moment of glory. “I imagine you’ll want to throw him back,” he said. I thought about it, considered the effort that had gone into catching Mr Trout, and decided there was only one destination for this fish: the oven. It was one of the best meals I’ve had in my van.

Our base at Park Cliffe Camping and Caravanning Estate was enough to inspire us to put on our walking boots. There is a footpath from the site leading directly into the mountains behind, and after just a few minutes you can be up above the woods enjoying terrific views over Windermere in one direction and the gentler mountains to the east in the other. That’s one of the best things about the South Lakes; unlike the more dramatic North Lakes, this area offers plenty of gentler, short walks on lower mountain slopes. 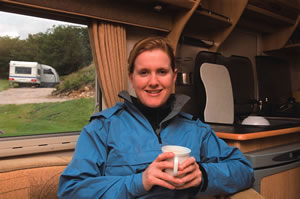 An easy walk that offers splendid views is from White Moss car park between Rydal Water and Grasmere. If you take the marked path towards the river, cross the bridge and head up the hill opposite, you’ll find a path that climbs gradually through the heather. There are benches or rocks to rest on along the way, a vista taking in Grasmere and the village beyond, and the winding road to Keswick. We were given this pointer by a friendly couple we met while exploring the bank-side path around Grasmere.

Another leisurely walk is from Skelwith Bridge to Skelwith Force waterfall. We visited twice, and it was amazing to see the difference after just one night of rain. The first time we saw the Force, all was tranquil, including a tempting plunge pool below. The following day it had turned into a terrifying white torrent. Walkers gathered nervously at the edge to have their photos taken as we wondered at the power of nature.

If you want to cover a greater distance and explore further afield, the Cross Lakes Shuttle is ideal. The boat-and-bus route links attractions and pretty villages around Bowness, Hawkshead, Coniston and Grisedale so you can walk, cycle, take a boat or catch a minibus to points beyond. Buy a ticket from the Windermere Lake Cruises office on Bowness Pier, aboard a Coniston launch or from a ‘Mountain Goat’ bus driver. Travel becomes so stress-free when you don’t have to worry about parking or how you are going to get back to your starting point. The shuttle was so flexible, we could spend an entire day exploring the fells around Windermere and Coniston.

One part of the shuttle that is particularly good fun is the boat across Windermere and the cruise around Coniston. After all, what’s the point of visiting the district if you miss the lakes themselves?

We explored Coniston Water with a themed, guided ride offered by Sunshine Cruises. There are tours taking in shore-front locations associated with speed-record heroes Sir Malcolm and Donald Campbell. Another brings to life tales from Arthur Ransome’s Swallows and Amazons series of children’s books. This magical ride even takes you to the real-life Wildcat Island where the novels’ young adventurers set up camp. We were swamped by nostalgia for these classic stories. 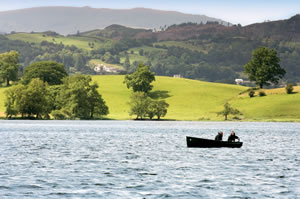 Don’t want to take your bike all the way to the Lakes? Windermere Canoe and Cycle Hire (tel 01539 444 451) offers discounts to travellers who get around on the Cross Lakes Shuttle. The hire shop is by the marina in Bowness.

Boat trips, which are a superb way to view surrounding peaks, are a pastime that people have enjoyed since Victorian times. You can still get a genuine, steam-powered, old-world experience on the Steam Yacht Gondola, or you can take a trip on one of the 1920s launches which, instead of steam, now use solar panels to power modern electric motors.

Another romantic spot for those of us who like imagining that we have travelled back to another era is Holker Hall and Gardens. After a filling lunch of local food in the Courtyard Café, we explored the 25 acres that are part woodland, part formal gardens. They’re Victorian in character, but don’t expect the style to be oppressive.

The Cavendish family, who have always owned the hall, have made the garden part of a modern family home and Lady Cavendish’s influence and sense of humour can be seen: hiding among the shrubs is a giant armadillo and, looming from the side of the house, two topiary elephants.

Visit Holker Hall in spring to see the display of rhododendrons in full bloom. Still, like the rest of the Lake District, the gardens are beautiful any time. That’s the real test of a holiday destination. In the case of the South Lakes, you’ll never be disappointed, whatever the weather.