Jeremiah Mahadevan revels in the challenge – and reward – of walking the rugged North Moors landscape.

Stand on the crest of an escarpment in the North York Moors and it’s very easy to see why Heathcliff was driven to such an enduring rage of jealousy and bitterness – the landscape that formed the backdrop to Wuthering Heights is one of the most desperately bleak in the world. The undulating moorland plateau seems to go on forever, a featureless expanse of brown and purple heath that’s interrupted only by the sky. 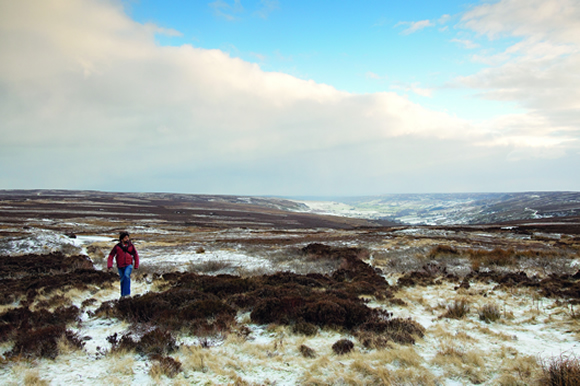 Now, I’m not trying to discourage anyone from paying the moors a visit; in fact, the opposite is true. I’d just like to make clear that their bleakness may not be to everyone’s liking, but those with broader tastes in scenery will find that little in the world can compare with what’s on offer in the North York Moors National Park.

However, the moorlands are not where this starts – rather, it begins in the dainty seaside village of Robin Hood’s Bay, just off the A171, between Scarborough and Whitby. I planned on spending as much time during this trip on foot, rather than on the roads, which was why I selected a campsite within walking distance of Robin Hood’s Bay and I went for a stroll into the village early the following morning.

Walking through the cheery little cobblestoned streets and back alleys, I couldn’t help wondering why Heathcliff didn’t just take a sabbatical off the moors and spend some time down in Robin Hood’s Bay, since it would be impossible for anyone to nurse a grudge for very long in such a consummately charming environment.

After a delicious cup of tea and lemon sponge at the deliciously quaint Old Bakery Tea Rooms, I was fully fortified and ready to tackle my first walk.

Robin Hood’s Bay sits on a segment of the Cleveland Way, a 110-mile long-distance path that takes in the best of the Yorkshire Moors. This route starts in Helmsley and curls around in an upside-down U-shape that skirts the hills along the western edge of the moorland, cuts across the northern edge of the moors to the coast, and then descends on the shoulders of seaside cliffs to finish up 110 miles later in Filey, south of Scarborough.

My plan was to tackle the segment between Robin Hood’s Bay and Whitby, which is about six miles long and takes in some of the most spectacular cliffs along the route. I picked my way through Robin Hood’s Bay down to its gorgeous beach, and from there picked up the Cleveland Way, and started following it north towards Whitby. The route is generally easy to walk and follows the line of the cliffs all the way into Whitby, where it runs close to the town’s abbey. It was evening by the time I made it into the tourist-friendly town of Whitby, known for being the setting for much of Bram Stoker’s Dracula. There are several tours and walks that you can join to find out more about the real-life places that feature in the novel. 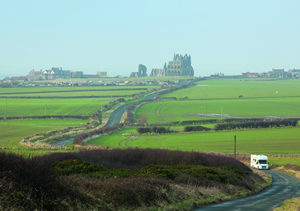 The narrow Yorkshire lanes, with Whitby Abbey behind.

A must for anyone visiting there, though, is a visit to the 11th-century ruins of Whitby Abbey. It played a major role in inspiring Stoker’s novel, and it’s easy to see why. From the abbey, it’s a steep downhill trek to Whitby proper, and then another uphill slog to get up the hills on the other side of the bay, which offer the best views of the abbey.

Having had my fill of the views, I walked back down to the seafront to seek out a different sort of filling experience at the Magpie Café, renowned for serving one of the best examples of fish and chips in Britain. I was not disappointed.

The next morning, I woke to one of the most beautiful sunrises I have ever seen, with the sun breaking out over the sea in a dazzling riot of colours. I rolled out of the campsite, hoping to see a different side of the moors, and drove out to Danby and the Moors Centre, set in Dawnay Lodge.

The staff at the Moors Centre are more than happy to direct people to the various walks that are to be had around Danby, and following their directions I took a short hike up to Danby Castle, a ruined 14th-century stronghold located up on a spur of Danby High Moor. The castle now sits on private farmland, so you have to ask permission to visit, but they’re very welcoming and it’s definitely worth your time. The area around the castle is excellent for walking, too, and I couldn’t resist venturing further out to Danby Beacon, which overlooks Danby High Moor. The desolate beauty of the view from up there more than justifies the effort. 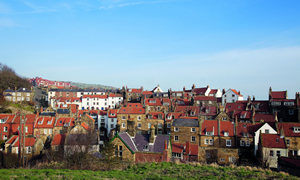 It was well into the afternoon before I got back to the Moors Centre and made my way to its tearooms. A well-deserved cuppa ensued, and then it was back to Whitby.

The next morning I decided that I would head out onto the moorlands proper. I followed the A171 in the general direction of Middlesborough, and cut off onto the A169 that wends its way south through the heart of the moors. I turned off the A169 onto Fair Head Lane, headed towards Grosmont. From Fair Head Lane I drove down to Beck Hole Road and parked up at a viewpoint to walk across the moors to Goathland, the setting for ‘Heartbeat’. I then walked back and drove towards Danby, heading through the village and down on the lonely, small roads that cut through the most remote portions of the North York Moors National Park. The road runs through Castleton, then cuts south.

I never made it very far, though, because soon after I got on the high, lonely road between Castleton and Hutton-le-Hole snow started to fall. Before long I was driving through a rapidly thickening cloud of snowflakes. Being on a high plateau and chilled by the wind off the North Sea, the moors can get quite cold and the snow was quickly piling up all around me. Soon I found a viewing point and parked up to wait for the falling snow to stop, taking the opportunity to have a quick bite to eat. 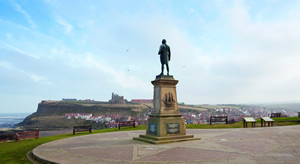 James Cook was born in Yorkshire and spent part of his life in Whitby, learning to be a seafarer. This statue in the town is just one of numerous commemorations of the great explorer.

As soon as the snow was over, I was greeted by a stunning vista – all around me the moors had taken on a blanket of white, criss-crossed with black where pathways and ditches cut through the omnipresent heather. Despite the biting cold I just had to venture out, using the OS map to guide me in the direction of an intriguing landmark – the Lion Inn which appeared to be in the middle of nowhere, on a deserted escarpment called Blakey Ridge.

It took over two hours for me to trudge there through the powdery snow, but as soon as the sun started breaking out from behind the brooding clouds I knew I’d made the right decision. The Lion Inn turned out to be a cosy, old-school bed and breakfast, with excellent, warming food and the finest sticky toffee pudding I have had in a long time. It was certainly ample sustenance for the walk back, and suitable gratification for having trudged out in the cold; but really the moors themselves will provide all the gratification you need.

If you have the resolve and the resilience, the North York Moors make for an unparalleled destination no matter the time of year. Not everyone has to be a Heathcliff, and for me the moors offer as much joy as they do melancholy.