In an ordinary street, a short walk from the centre of Belfast, is one of the National Trust’s most unusual properties. It has been damaged by, but survived, the turmoil in Northern Ireland. 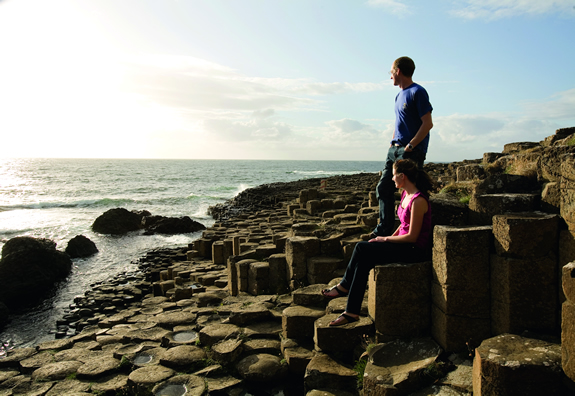 However, it isn’t the town hall. It has links with the Italian craftsmen who sculpted the cathedrals in the city, but it isn’t a church. And it still performs the same function that it has done for 160 years. It’s a pub.

The Crown Bar dates from 1849, but it wasn’t until the 1880s that it became famous. The resourceful son of the owner convinced Italian tradesmen who were building cathedrals to moonlight on the Crown.

The result is a blend of masterful carvings, etchings and paintings that create a rich, atmospheric interior more likely to be seen in a house of worship than in a public house.

Even the windows are decorated, allowing gentlemen to have ‘a quick drink’ without being seen from outside. The tables are concealed, too, in ‘snugs’.

I like to think they have screened much conspiracy and many clandestine meetings in their time.

Most caravanners drive through Belfast on their way to the Causeway Coast. Richard and I had planned to do just that. But over the previous two days we had towed the van from London to Holyhead, joined an Irish Ferries crossing to Dublin, and continued to Belfast. We had cabin fever.

It was lunchtime when we reached Belfast. With a whole afternoon ahead of us, we decided to pitch the van and spend some time exploring.

Just north of the city, on the coast road we’d be following, we found Jordanstown Lough Shore Caravan Park. Its location couldn’t be more convenient and there was an available pitch.

This is a small site; just six pitches. But it’s secure, has electric hook-ups, a water point, dishwashing sinks, toilets and showers. There isn’t a shop or grassy space, but with all the things to see around the city, we weren’t planning to spend much time on site.

We set the van up and headed into Belfast for food supplies and to visit the tourist information centre. There were places we wanted to visit, but after all the time we had spent in the car, Richard and I both felt like stretching our legs. Cave Hill Country Park looked like the place for us.

Belfast Castle is here, but the park also has footpaths across the hills above Belfast. We picked a walk that took us to a lookout above the city. The return trip took us about an hour. Half way up we found out why Northern Ireland is so green. It rains. A lot. Of course, we should have been prepared and packed our waterproofs even though the weather was fine when we set out. But we didn’t.

By the time the rain had become really hard we were almost at the top. Since we couldn’t get much wetter, than we already were, we decided to push on.

It was worth it. As we reached the lookout the rain stopped and all of Belfast materialised below us. We only had five minutes to enjoy the view before another low cloud blew in. First, the ocean horizon blurred with the sky. The ferry coming in to port looked as though it was flying; its wash turned into a jet stream. Belfast disappeared again and the hill just 600ft ahead of us was smothered in white. It was time we turned around and headed back.

To our surprise and delight, it didn’t start raining again, so we headed a bit further along the road to Belfast Castle. There is an information centre on the second floor, but the rest of the building is not generally open to the public. We strolled through the immaculately kept grounds, watching out for a white cat. 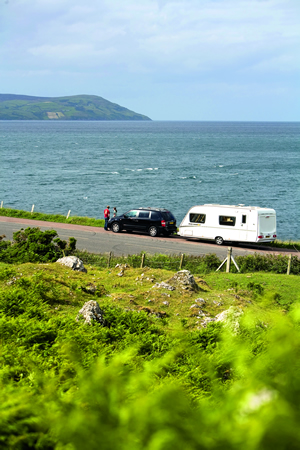 The scenery changed. For the next half hour, the only other vehicle we saw was a tractor. This was the Northern Ireland I had imagined.

A castle legend has it that visitors will have good luck if a white cat lives in the garden. Sadly, the only cat we found was a statue. Still, that could be lucky, too – couldn’t it? All the walking had made us hungry. Soggy but smiling, we headed back to our van for warm showers and a hearty meal before bed.

We returned to the city the next day before heading up the coast. On first appearances, Belfast looks fairly new. It has all the high street chains in large shopping malls fronted by pedestrianised strips. But spend just a few hours here and you will stumble across much of the city’s history. There are cathedrals, a grand town hall, Queen’s University and, just outside the city, is Thompson Graving Dock, where the Titanic was built.

Our favourite find, though, was the Crown Bar. We wandered in at lunchtime and were happy to find that it is still a working pub serving drinks, food and good craic (that’s ‘a good time’ to you and me).

We tried the Irish stew and champ (potato mash with spring onions). It was excellent grub.

Belfast was a pleasant surprise, but after lunch, with cabin fever banished, we were ready to get back in the car and head north. From the site we joined the A2, which forms much of the Causeway Coastal Route as it runs along the east and north coasts to Derry.

We paused at Carrickfergus to see the castle perched precariously on the rocks at the water’s edge, then drove on through the port of Larne. From there the scenery changed dramatically. The buildings fell away behind us and everything became green. Woolly white sheep with black faces and black legs dotted the fields. For the next half hour, the only other vehicle we saw on the road was a tractor. This was the Northern Ireland I had imagined.

We wound our way along the A2 before turning off towards Cushendun. There is a council-run campsite here that has 12 hardstanding pitches, all with electric hook-up and water points, as well as a washblock. It is quiet, relaxing and run by friendly staff. There is lots of green space and established trees screen it from the road. It is also just a few minutes’ walk from a picturesque beach, where we headed once the van was pitched.

It was a bright, summery evening so, with the van safely pitched on site, we explored smaller roads that weave their way over the nearby hills. We followed the scenic route to Torr Head, passing lush pastures and picturesque houses.

After negotiating our way past tractors and a flock of sheep (definitely not a road to take the van on), we hugged the dramatic coastline to a lookout and were rewarded with spectacular views. The green hills around us rolled to the edge of the chalky cliffs and plunged into the blue water. 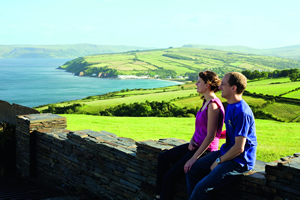 Although it was still light, our stomachs were telling us that it was getting late. We returned to the van for a pasta dinner and a glass of red wine, more excited than ever about the next leg of our journey.

We were up early the next day, keen to get going. After breakfast we hitched up the van and towed it to Ballyness Caravan Park, south of the town of Bushmills. It is nestled among hills, and has plenty of green space to spread out onto. The pitches are fully serviced hardstandings, and modern facilities are housed in a central block.

Above all, the site has a fabulous location on the north coast, much of which is an Area of Outstanding Natural Beauty. There are so many places to visit, all an easy drive from the site, that we spent two days exploring.

At Carrick-a-Rede Richard and I dared each other to cross the rope bridge despite the gusty wind. The bridge is 80ft above the sea and spans a gap of over 60ft. A few steps in, it started bouncing under our feet and swaying. The trick is not to look down until you’re across.

We took the tour of the Old Bushmills Distillery. At 400 years of age, it is the oldest legal whiskey distillery in the world. After breathing in the sweet smell of malt, and being boggled by the speed of the bottling line, I designated myself driver and let Richard try a glass of the 12-year-old, single malt. Getting him out took almost as long as the tour.

We came across the ruins of Dunluce Castle. Local legend has it that its inhabitants looted a Spanish ship that capsized off the coast, bringing a curse upon themselves. Soon afterwards, the kitchen fell into the sea – pots, cooks and all. The castle is still falling into the sea, but coastal erosion is a more likely culprit.

Further west we stood inside Mussenden Temple, once the summer library of Frederick Hervey, the bishop of Derry. Its domed rotunda was built in the late 18th century on the cliff edge so it would have views in all directions. Looking down from the windows, we saw the waves crashing right under us: an unnerving experience. The temple has stood the test of time better than Hervey’s mansion, which is still an imposing structure although it is a ruin. 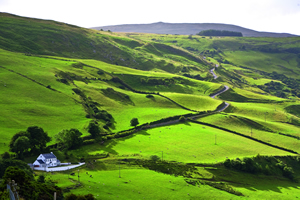 The winding road to Torr Head is trying with a van.

We also marvelled at the precarious positions of Dunseverick and Kinbane castles, little of which remain.

We kicked off our shoes and walked along the sandy crescent beach of Whitepark Bay, while around the headland is the ancient fishing village of Ballintoy.

The most famous landmark in the region, however, is the Giant’s Causeway. It was instantly recognisable, but still breathtaking. The columns were bigger than I’d expected, and there were more of them. Some have just four sides, some five, some six. Half are concave on top, half are round. Pooling water has stained the concave columns with sunbursts as individual as snowflakes. The rounded columns are smooth, weathered and spotted with lichen. Walking towards the water is like picking your way down a worn staircase. It’s a great place to watch the sun set.

We still had a day before we had to return to Dublin and catch the ferry home, so we chose to visit Derry. The city is 40 miles from Bushmills, but it is an easy drive along the A2. Today the city is a busy shopping centre, but not so long ago it was the centre of what the locals call ‘the Troubles’. Despite the high street brands and new shopping malls, the city still bears the scars of the battles fought on its streets.

The town’s history is the main reason for visiting. We spent just a few hours in the city, but found it a moving experience. Murals from both sides of the divide remain on the walls of houses, depicting each view of the events that occurred. Plaques commemorating those who were killed can be found on the street, on the sides of buildings, and on the city walls. Many kerbs are still painted to show the allegiance of the people who lived on them. And all around the city, flags fly proudly.

On our last day we woke up to clouds and drizzle. But as one local said, “There’s not much you can do about the weather, except talk about it.” So we didn’t let it stop us from retracing our steps along the coast road to Belfast.

As we left the Causeway Coastal Route, a final sign wished us ‘safe home’.