The top site was plucked from hundreds of contenders just ahead of Poston Mill Park, Herefordshire which claimed the silver award at the event on April 23. 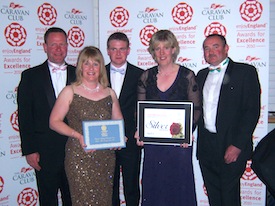 Both parks fall under the Best of British network, dedicated to finding Britain's finest quality touring venues. The Best of British group was formed in 1981 by six independent park owners, 51 parks now making up the collection that prides itself on offering that little bit extra.

Trethem Mill is set in 12 acres of land in an area of outstanding natural beauty, run by three generations of the Akeroyd family who provide an immaculately clean site. Over 17 years, amid 33 acres of Herefordshire countryside, Poston Mill Park has transformed itself from a grass field with 18 hook ups to a five star touring destination.

For more information on these parks or any in the Best of British Group, visit http://www.bob.org.uk/.