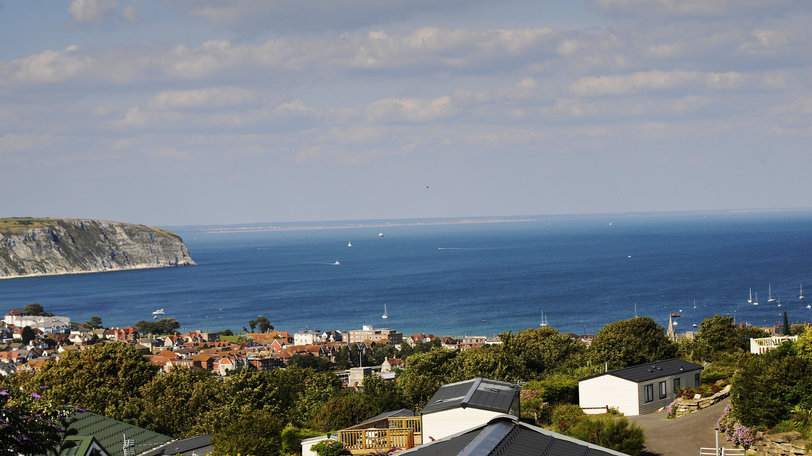 Attractive Holiday Park with commanding views of sparkling Swanage Bay, the Isle of Wight and the beautiful Purbeck Hills. Facilities include skittle alley, indoor bowls and gym. Our staff are dedicated to making your stay as relaxed and enjoyable as possible.

Explore the nearby villages or bustling seaside resorts. Swanage itself is a town rich in history and architecture, and offers numerous shops and restaurants. Poole and its vibrant harbour with shops and restaurants, is a short distance away and is even home to the world famous Sunseeker yachts. The market town of Wareham is also just a short 15 minute drive from our park, a picturesque town with some fantastic walking routes and high quality restaurants.

The nearby towns of Swanage, Studland and Lulworth offer a huge range of beaches with Swanage’s golden sandy beach, studlands’ stunning sand dunes and the chalky cliffs at Lulworth cove. Whilst exploring the rich environment that Dorset has to offer, be sure to keep an eye out for some of the rare birds and reptiles that have made Dorset their home, and perhaps even some of the fascinating marine life such as dolphins that have been known to live in the area.

Just returned from this site yesterday so were there for Swanage Carnival week. This is the first caravan park I have stayed on but had thoroughly researched our options in Swanage beforehand. We had hired a privately owned caravan on site which had a fantastic view over the bay and surrounding coutryside. The downside of this was that it was a fairly steep climb up from the reception/clubhouse/laundette so pretty hard work for older people/pushchairs. The site was well laid out, pitches not too close or overlooking each other and the other owners we met were friendly. Having two small children we felt that the entertainment in peak season was poor, two evenings a week there was a children's disco (the same one both times with the same music/games) and that was it. This didn't start until at least 7.30 so not much use for us after the first half hour or so. Drinks and meals in the bar were pricey. Reception closes at 5.30 at the latest. I picked this site as it had an indoor pool, but the one time we used it the water was quite cool so we didn't bother again (and they charge you to use it!) Can't comment on the gym as we didn't use it. No shop on site although the nearest is probably ten mins away (uphill on the way back!) Thought that the 1 mile or 10 minute walk to the beach/town was an underestimation - if you have small children or older people it would take a lot longer as it is on top of a hill. Overall - lovely scenery but would chose somewhere with more going on next time.
Swanage Bay View Holiday Park, Swanage, Dorset