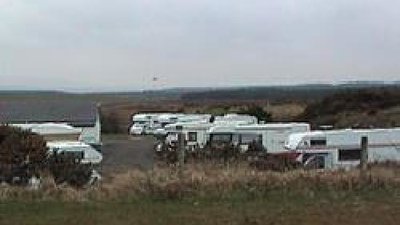 Glenmore Camping is situated on the B15 and central for visiting the Giants Causeway, Rope Bridge, Bushmills Distillery or the Glens of Antrim, The site is well managed and is probably the quietest and best lade out in N Ireland. with individual areas for vans and tents. It has a new shower block which is serviced regularly, there is a restaurant on site as well as a fishing lake, highly recommended for the foreign tourist

What should been a memorable family camping trip, turned into a bizarre situation whereby we all wanted to leave. After a day at the beach, we returned back to the campsite to light the pit fire and have a BBQ for dinner. The "campsite" comprised of a field at the bottom of a steep windey hill, with no other tents, no lighting other than the road & numerous muddy digups. Basically it looked like a muddy, disused field which presumably was waterlogged most of the summer but a quick earner for the owners.
As we sat with the three young children about to wave goodbye to the grandparents visiting, the owners car drove down the field. He stormed out of the car & began ranting about us lighting a fire. Initially he explained that even a small pit fire could have sparks that could ignite something 30 miles away etc, which was a valid point. We apologised as we hadn't realised campfires with wood were banned, and he quickly told us there was a £50 fine. We asked him if he wanted us to put it out & he said to let it die. He proceeded to rant about a scorch mark under the fire pit & continued to get more and more agitated and irate. This was reasonable to a point, however the manner he deliver this was completely unacceptable in front of young children who were distressed and upset. When we pointed out that it was in fact a muddy, empty field with other scorchmarks & far from pristine, he exploded & told us to get off his land & if we didn't, he'd phone the police. This was 10 to 9 at night. Gobsmacked at what had just taken place, we were left distressed & worried about what to tell the children and how to take down the tent so late at night. Around 20 minutes later, he pulled up again with his wife who was very apologetic. She told us we didn't have to leave after all, he didn't mean it and that he'd had a bad day and enjoy our stay! Needless to say we didn't sleep well that night in the field. We are truly shocked at this behavior, it was almost toddler-like & a complete over reaction. Upon returning, we've realised that this has happened to other families as well as our own. Also confirmed by a member of his own staff who said they all knew about his irratic behavior. This owner (who I believe is the son) is a complete embarrassment and isn't capable of running a business. Avoid this place.

We have stayed here twice as it is in avery good location close to Ballycastle. A couple of things I didn't like were the fact that you have to pay £5 extra for an electricity card. The last time we left there was money left in the meter and we dedn't need to use our card as £2.20 was enough to last the whole weekend. This makes me think that forcing you to buy £5 of electric is overcharging. There are swings in the garden of the house but frankly they are a health and safety danger. The toilet and shower facitilities are nice and clean but if they start to cahrge I would expect the nightly price to come down. This site charges extra for children so the £18 fee we saw advertised ended up being £20 per night plus the £5 electric. This price is similiar to that charged by the very best sites and this site, although fine, just doesn't warrant it. Having said that, the location does compensate as there are not too many places to stay near Ballycastle.

Stayed at this campsite for 3 nights enjoyed every minute of it. Lovely veiws especially on a sunny evening you can sit with beer and watch it go down. The shower block is clean and well maintained, they have a resturant on site which is handy and the food is amazing and they also serve lovely pints of guinness would recommeded to anybody travelling around the north antrim coast will be back .

Booked this site for 5 nights,however left within 3hours.Reasons 1.The pitch we were sold was not suitable to take an awning [this was a point of debate between both owners at check in]. 2.A manhole to the back of the pitch was raised with human faeces and toilet tissue oozing out and covering the surrounding rough grass. 3.Electric supply from hook up faulty.
Decision taken to move on only offered 4 night refund by camp site owners.Extremely disappointed with overall standard of site.

I have stayed at Glenmore 3times and the last time was very disappointing we we're due to stay for 3nights however left after the first due to a very noisy group keeping the rest of us up to 2am drunk and singing, The owners claimed they didn't hear anything which I simply don't believe. The washing facilities are reasonable since they are currently included in the price for camping however the owners again told us that they we're planning on putting in meters for the showers so unless they are getting upgraded then this would not be value for money. The site is geared more towards caravans with a rocky path to walk up to get from the campsite to the facilities the first couple of times I stayed there this was acceptable due to the fact that the site was one of the cheapest around however in recent years prices have increased well above the rate of inflation and services have not improved so will not be returning its too far out of the way to be charging the rates it does for having very little to offer not even a park for the kids.