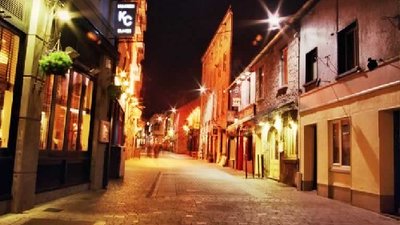 Spiddal Caravan and Camping Park is a Gaelic speaking caravan park close to Spiddal Village in County Galway, in the west of Ireland. The park welcomes guests with motorhomes and touring caravans, and also has a selection of holiday cottages available for hire.

Laundry facilities are provided at the park, while there is also a children’s play area, ideal for little ones to run off their energy reserves at the end of the day. Electric hook ups are provided for guests staying in their motorhome or touring caravan.

The park itself is around a mile from the centre of Spiddal Village, which can be reached via a short walk or drive. Spiddal Caravan and Camping Park is a popular fishing spot in the west of Ireland, owing to its position sat on the banks of the Spiddal/Boluisce River. It is well known that sea trout can be caught almost daily in the river, although numerous other species of fish can also be caught there and in the surrounding area.

Guests who love beach holidays will also find some great locations a short distance from the site. Although often exposed to the weather systems of the Atlantic, the beaches close to Spiddal Caravan and Camping Park offer relatively calm seas that are ideal for swimming and paddling. The surf is livelier in some locations around the coastline, where you can enjoy body boarding, windsurfing and other popular water sports.

The landscape in this part of Ireland is largely rugged and unspoiled, and as such outdoor activities are the perfect thing to do. While there are plenty of fields and open spaces for enjoying ball games, the real attraction of the countryside across Galway is simply to explore it.

Although walking is the most popular means of getting around, most of the terrain is also accessible on bicycle.

A number of exceptional golf courses are found nearby, with those by the coast offering a challenging round as well as breathtaking cliff-top views out to sea.

When it’s time to relax, there is plenty of opportunity to do so in Spiddal Village. There are a number of great pubs, many of which host traditional Irish music at weekends, while some of them also double as restaurants. There's also a Chinese restaurant in the village, and if you'd rather eat in, but don't want to cook every night, why not try a takeaway?

Spiddal also has a selection of amenities to ensure guests can get whatever they need during their stay, including a convenience store and newsagents, a butcher’s, a pharmacy, and a department store.

Further along the coast guests can drive into the city of Galway itself. There are several museums and other cultural places of interest to discover in Galway, including Eyre Square, the Spanish Arch, and Dunguaire Castle.

The Moycullen Bogs, a National Heritage Area, are a great place to spend a day outdoors discovering wildlife, and is found on the way into Galway city from Spiddal.

For your family motorhome and caravan holidays near Galway, or holiday cottages in the West of Ireland, take a look at all that's on offer at Spiddal Caravan and Camping Park.

I have been coming to this camping park for decades at this stage and still find it wonderful. It is well planned out and the landscaping is both beautiful and true to the area. The toilet and kitchen facilities are always immaculate. The service providers are very friendly, facilitating and knowledgeable about where to eat and things to do. Will definitely be back!

Complete dump and dangerous ,told to leave because baby cried for 20 minutes at midnight ,if you want to be bitten to death by midges it's the perfect place or break you're neck on the 500mtr unlit driveway not to mention the building site . Avoid !!

Extremely disappointed, Campers and tourers cramped together no privacy. Owners have a lot to learn especially with how they treat their customers!!park itself just average... Would not recommend at all !!

Easily one of the worst campsites I have ever visited! There is an unfenced building site, gas bottles strewn about, a toilet block infested with moths and other insects and the flooring in the shower cubicles is cracked and can cause injury. There is an unfenced sewerage treatment plant.

A very dilapidated unappealing site. Concrete pitches covered in cracks and rubble. Grass overgrown and full of weeds. Very few facilities. Toilets/showers absolutely horrible. I don't know how they have the nerve to charge for this facility. The site is not easily accessible to Spiddal as it is up a long steep road. If there had been any view over Galway bay this might have been one saving grace, but the only view you will have is of what looks like a building site.