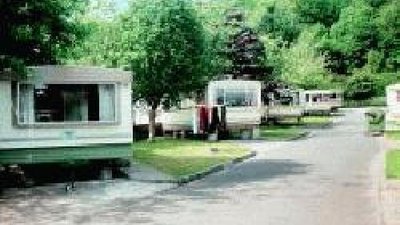 A family run long established site with panoramic views overlooking Killarney's lower lake set in a wooded background making it a perfect holiday location.
We cater for touring caravans, dorm mobiles, motor homes and tents, together with 6 luxury static mobile homes for hire. With panoramic views over looking Killarneys lower lake and the majestic Mcgillycuddy Reeks, Beech Grove Park is an ideal base for touring the 'Kingdom of Kerry'.

What better way to experience a real freedom holiday option than to relax in the pleasures of the outdoors. Whether you're looking for the adventure of a camping holiday or the comfort of fully serviced accommodation in the form of mobile homes, we can cater for your needs. We maintain personal supervision of the park, facilitating both the highest standards in hygiene and access to local information, assuring you of a carefree holiday in a 'home away from home'.

Campers' kitchen with seating and tables allows campers to cook inside during poor weather. Refrigerator facilities for storing small quantities of food is also available. There is also BBQ area as well as shaving points and hairdryer. Access to local information available.

Irelands most famous tour begins here in Fossa taking in spectacular scenery along the route. Places included in the tour are:

Along the same route there are plenty of sea views to choose from - Rossbeigh beach, Dingle Bay, Kells Bay, Valentia Island, Ballinskelligs Bay,Skellig rock, Kenmare Bay and Derrynane beach.
The distance of the ring is approximately 177km and is well worth while. Organised coach tours are available.

The Gap of Dunloe is the 10km mountain pass dividing the purple mountains from Mcgillycuddys' Reeks. One of the most scenic glacial valleys in Ireland is only about 7km form Beech Grove. The Gap is renowned worldwide for its tour, but has to be seen to be appreciated. The combination of its rugged beauty, enchanting lower lakes and rivers, and colourful flora and fauna make the Gap a magnificent masterpiece. Leaving from Kate Kearneys cottage, visitors can enjoy the tour as they please i.e. on horseback, jaunting cart, cycling or walking. On reaching the 'upper lake', the tour can be continued in the classic 'gap boat' trip through the Killarney lakes. A must for all day-trippers.

Built in 1843, Muckross house is a magnificent Victorian mansion standing in the scenic heart of Killarney, the National Park. The 65 - room mansion portrays both the lifestyles of the landed gentry and their servants. The famous gardens of the house reach down to the shore of Killarneys' middle lake and are surrounded by the mountains Mangerton, Torc, Eagles Nest, Tomies and Shehy. The farming traditions of a rural community of the 1930s are represented also in Muckross. The traditional farms recreate the past using skilled artisans to carry out daily tasks and are complete with animals, poultry and traditional farm machinery. A fascinating insight into a simpler way of life in the 1930's.

This 15th century castle lies on the shore of Killarneys Lough Lein. In 1652, Ross Castle was the last castle in Munster to fall to the English general Cromwell. In the 18th and 19th centuries, the castle was used as a military barracks. In recent years the castle has been beautifully restored and guided tours are available to the public. From Ross Castle also there are trips by open boat to Innisfallen and watercoach tours of Lough Lein.
Innisfallen Island - The 2.5km tour across Lough Lein by open boat is highly recommended. The island, which is famous for its Innisfallen annals and as a place for learning, contains monastic ruins dating from the 6th to the 13th centuries. The early Augustinians founded their University of the West here - a monastery of learning and culture sought after the nobles of Ireland and Europe.
Lough Lein - The original gaelic name of the lake meaning 'the lake of learning' derived its name from the abbey on Innisfallen (the centre of education). Taking the trip by watercoach or boatman is recommended as the tour is enhanced by the commentary on the history and legends of the lakes. Lough lein is also renowned for its angling being both rich in brown trout and salmon.

Only 1.5km from Beech grove is one of Killarneys most spectacular viewing points of the lakes and mountains. Aghadoe has been regarded as a special place since ancient times. Apart from the panoramic views, monastic remains dating as far back as the 6th century can be seen. One can climb the stairs of the remaining round tower, which was built in1026AD. The Normans also built a castle here in the 13th century below the church. Aghadoe - a perfect spot for a picnic.

Renowned for its rugged beauty, the Dingle Peninsula juts out into the sea and commands spectacular views. The town itself, while progressive, still retains much of its old-world atmosphere. The visitor is spoilt for choice here - go swimming with Fungie the friendly dolphin; visit the Blasket Islands; enjoy a game of golf at Ceann Sibeal; take in the sea breeze at Inch; go pony trekking on the hills. There's something for everyone.

North Kerry
Ballybunion Golf Club, Co. Kerry
North Kerry, containing the busy towns of Tralee (the capital of Kerry), Listowel and Castleisland, has a lot to offer. The sandy beaches of Ballybunion, Banna and Ballyheigue are a few of the coastal resorts to be found in North Kerry. You can follow the footsteps of the stars into the glorious Ballybunion Golf Club, where the likes of Tiger Woods and Bill Clinton have played.

History and legend can be found in the medieval Ratoo Round Tower in Ballyduff, Ballylongfords' Carrigfoyle Castle and the monastic remains at Ardfert and Abbeydorney. The 'Rose of Tralee' festival guarantees Tralees' standing as one of the country's main holiday centres. Listowel, the main market town of North Kerry, centres around a 15th century castle and is regarded as the 'literary capital of Kerry', being the birthplace of many great writers. Castleisland boasts one of the widest streets in Castleisland and also has some excellent restaurants and pubs.