Loch Lomond and the Trossachs: The beauty of park life

The Loch Lomond and Trossachs National Park is a gem of deep lochs, forest and delightful villages.

While the Scottish Highlands is rightfully praised for its wild expanses and solitude, it would be a mistake to ignore the National Park that many visitors drive through in order to get further north. Loch Lomond and the Trossachs has only been a National Park since June 2002, but there’s nothing young or undeveloped about it. 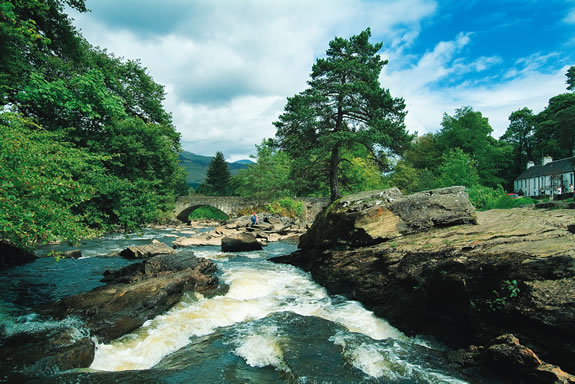 Between the deep waters of Loch Lomond, the wild glens of the Trossachs, Breadalbane’s high mountains and the sheltered sea lochs of the Argyll Forest, the national park offers a variety of landscapes. The focus of the area is undoubtedly Loch Lomond, which is every bit as handsome as people will tell you. The Scots are well aware of its popularity and have thoughtfully provided plenty of parking places from which to stop and stare out across the water through the trees. 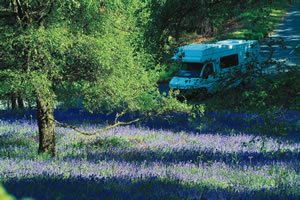 West of Loch Lomond and set on the banks of Loch Fyne is the captivating tourist haven of Inveraray. The old village was flattened in 1745 by the third Duke of Argyll to make way for a castle and a new town. The big attraction in the town is Inveraray Jail. Dating from the time of the third Duke, it’s now an interactive museum and exhibition.

The castle, on the edge of the town, and still the seat of the Dukes of Argyll, is also worth a visit: it houses some important artefacts, including an arsenal of weaponry. If you are interested in all things maritime, head to the pier and visit the Arctic Penguin, a triple-masted iron sailing ship that was built in 1910. It is now a maritime museum (01499 302213).

To really appreciate the beauty of Inveraray, take the road to Loch Lomond and as you drive along it look in your mirror and you will see the town’s white buildings reflect into the water of Loch Fyne.

Along the western shore of Loch Lomond is the perfectly presented village of Luss. As the setting for the Scottish soap opera Take the High Road, the village attracts huge amounts of visitors every year. Parking with a caravan is not a problem, though, as there is a huge car park.

There has been a village on the site for 1000 years, and the present tiny cottages that sit on the edge of the Loch in their captivating setting have been designated a conservation village. It’s a great place for a wander. Our advice is to go early in the morning. You’ll see it at its best with the sun rising across the water, the rows of sandstone cottages aglow, and you’ll have the vestigial beach all to yourself. Early evening is also very pleasant, although the sun dips behind the trees quite early and can leave you feeling chilly as you wander through the pretty streets.

The Camping and Caravan Club has a site at Luss, but when we visited, it was full. We were directed instead toward Milarrochy Bay, just half a mile as the crow flies, a 20-mile road trip to the other side of the lock.

The club site is located on the east bank of the Loch. The eastern side is more heavily forested than the western bank, so is more sheltered. We were given a pitch at the top of the site, looking down towards the lake. Despite the pitch being very close to the road, it was quiet, as the road is effectively a very long cul-de-sac and only leads to car parks dotted along its route. There is a launch area for small boats on the site, and during our visit, plenty of people were doing what sailors do, getting their craft ready for a voyage on the lake.

Travelling unladen you can explore the dead-end road for another five or so miles beyond the club site, interspersed with the odd car park, but despite never getting far from the Loch’s edge, there are few clear views across it, thanks to the heavy tree cover. Having navigated the twisty road to its conclusion, you can park alongside the water at Rowardennan and go for a wander. The car park is a popular base for walkers. As well as short strolls, the more intrepid walker can scale Ben Lomond, the 3000-foot peak that gives panoramic views over the surrounding areas.

Back along the twisting road from Rowardennan heading south, and beyond the site at Milarrochy Bay, is the small village of Balmaha. Perhaps the most worthy thing about Balmaha is the fact that it sits on the fault line that separates the highland and lowlands of Scotland. There is a viewpoint from where the line can be easily seen across the water. An information centre gives you the gen on the area. There’s a small supermarket here, so you can stock up on a few essentials. There’s also a small pub on the green, the Clachan (01360 660 824), where you can stop for a quick half and a bite to eat before pressing on into the Trossachs National Park. The park encompasses Loch Lomond, up as far as Killin in the north and Balloch to the south. It is watched over by the Park Authority that, as well as promoting tourism and raising awareness of the area, is there to protect the environment within the region. It’s a careful balancing act. It’s immediately obvious why people visit the area. The road to Callander gets more attractive the further north you go.

Aberfoyle is a small town worth a wander on the way. It has a touristy feel. The shops have tartan draped from the sunshades, people are walking around in shorts, and there are cafés with outdoor tables. 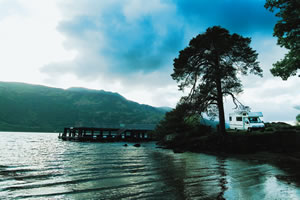 Callander is the same. It has been luring visitors for a couple of hundred years and when we visited, it was still proving a major draw. The main attraction in Callander is the Rob Roy and the Trossachs Visitor Centre, an imposing converted church that sits cleaving the high street in two. Inside, the ground floor is a busy tourist information centre, bedecked in all manner of chintzy gifts and nick-nacks. There is also a small theatre where for £1.50 you can see a 20-minute film about the town’s famous son, Rob Roy, and a 10-minute film about the area.

Further north, just as the park peters out and at the western end of Loch Tay, is the village of Killin. It’s a small village, with a major water feature. The River Dochart runs through the village, dropping several metres in the process, forming the Falls of Dochart. This shallow group of small waterfalls runs alongside the road and under the road bridge which links the two halves of the village. In the middle of the falls is the island of Inchbuie – the traditional burial place of the MacNab clan.

There is a signposted car park at the far end of Killin.

The main attractions in the town, the Falls and the visitor centre, are within a 15-minute walk. This walk takes you past the small supermarket and a handful of small cafés and the Breadalbane Folklore Centre (01567 820254), which overlooks the falls. The centre is in an old water mill with working waterwheel, and here you can see video screen presentations telling the story of St Fillan, a monk with healing powers who settled in the area.

There’s also a souvenir, gift and bookshop. It’s a fun way to waste half an hour or so.

Carry on walking and you will come to a pub that overlooks the Falls. Despite the nice weather and the glorious setting, we had the place pretty much to ourselves when we went. We sat outside, beer in hand, completely relaxed. We’d recommend it to anyone.