The Central Highlands of Scotland, a land of imposing mountains, grand lochs and glorious glens. 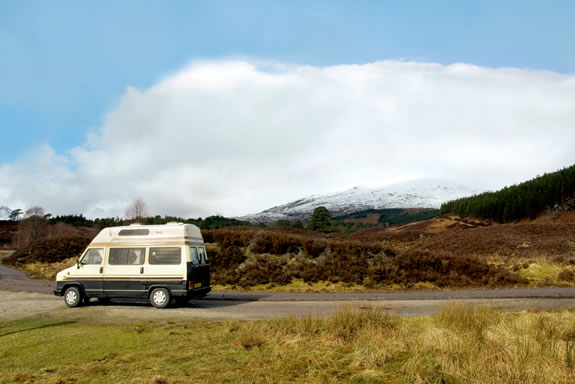 The town of Fort William sits on the shores of Loch Linnhe and Loch Eil in Scotland’s Central Highlands. Due to nearby Ben Nevis, the highest mountain in Britain, the area around the town is popular with climbers and hikers. But you don’t have to be a mountaineer to enjoy the spectacular scenery of the region – there are plenty of gentle rambles, too, as my husband Mark and I discovered on our recent tour.

We set off for Fort William, from the Cairngorms, at mid-morning and arrived just after lunch. We parked at the southern end of Fort William and made a quick round of the town. We then returned to our ’van and bought a few supplies at the large Morrisons supermarket before heading to Linnhe Lochside Holiday Park a few miles west, on the Road to the Isles. ‘The Road’ is a route where Bonnie Prince Charlie found safety in this area of the Highlands – it runs from Fort William, to end at Mallaig (Road to the Isles). Along the way, we also passed Neptune’s Staircase, a system of eight locks on the Caledonian Canal.

Having checked in at the campsite we settled down for an early night. After a misty dawn we set off early to continue our journey, north towards Loch Ness and finally to Glen Affric. Along the way, we drove through the small village of Spean Bridge and stopped to pay our respects at the Commando Memorial, about one mile north of the village. The imposing bronze statue, placed there in 1952, commemorates the members of the elite Royal Marine units who trained nearby during WWII. It depicts three commandos looking towards the northern faces of Ben Nevis and Aonach Mor. The families of servicemen killed in Iraq and Afghanistan have added their tributes to the monument, which has made it even more poignant.

We continued along the A82, with its wonderful views of Loch Lochy, to our campsite for the night, Loch Ness Caravan and Camping Park. This is the only site on the shores of Loch Ness so booking is essential.

The first thing we did on arrival was to don the midge repellent. Anyone who has spent time in the Highlands will testify to the ferocity of the midges. The best repellent (once a closely guarded secret) is Avon’s Skin So Soft spray-on body oil. It works like nothing else, is kind to your clothes and skin, and smells nice, too. However, it only seems to work in the ‘Woodland Fresh’ fragrance!

It was very exciting being so close to the home of Nessie, the Loch Ness monster, but luckily the campsite had a bar at which to settle our nerves. It’s worth noting that sightings of Nessie increase considerably after visitors have been to the bar! The next morning we got back onto the A82 and continued our journey north.

Stopping to take photos when going north on the A82 is tricky as the parking bays are on the loch side of the road. However, one good stopping point is Urquhart Castle which is operated and maintained by Historic Scotland (click here). The castle has a visitor centre and an admission charge of £6.50. Opinions differ as to the origin of the site, but there is evidence of a Pictish settlement dating back to 580AD. The first castle was built there around 1230 by Alexander II, King of Scotland at the time, following the crushing of the Moray revolt. 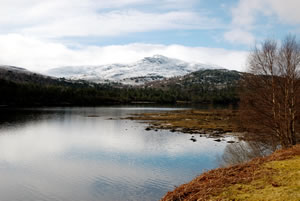 The scenery at Glen Affric will take your breath away – it is truly spectacular and the most photographed Glen in the whole of the Scottish Highlands.

Just to the north of Castle Urquhart you will find the village of Drumnadrochit, at the head of Urquhart Bay, on Loch Ness – it is the centre of the Loch Ness Monster ‘industry’ in Scotland. And, as a consequence, there are plenty of parking spaces for motorhomes and good places at which to eat. You just cannot escape Nessie around these parts: there are two visitor centres here. We didn’t have time to stop, though, as we were keen to reach Cannich Caravan Park, our base for the night.

Apart from the campsite, there’s not much in the village of Cannich apart from a small shop that doubles as the local post office. But, just 20 minutes from the site is Glen Affric, reputed to be Scotland’s most photographed glen. And it definitely lives up to its reputation – it is simply stunning.

When there is snow on the mountaintops and the crisp Highland air is full of birdsong, I cannot think of a place in Scotland I would rather be. As a photographer I didn’t know where to point my lens first, with waterfalls, cascading rivers, and lochs which – on a still day – mirror the high mountains above them. 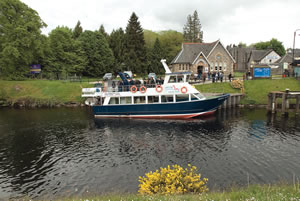 The road into Glen Affric is single track and there are few passing places, so be prepared to wait because no-one around here does anything in a rush. Within the glen there are parking spaces and signposted walks available at several points. For those who want to take a long walk but do not care to tackle steep inclines, then the Loch Affric walk, at a little over 12 miles long, is a good option (Walk Highlands). Routes of between 15 minutes and an hour are also available. We chose the short River Affric walk which is a delight and takes about 45 minutes.

It’s hard to imagine, when you’re here, that it is only a short drive to the busy city of Inverness. But the following day we visited the city via Beauly and were rewarded with some fine shops, art galleries and restaurants.

We really enjoyed our tour of this wonderful area – it is exactly what owning a motorhome is all about. The scenery is spectacular and the campsites are great and I would recommend anyone to tour this part of the Highlands.