Time and Tide in Orkney

Motorhome owners Keith and Sue Lawrence discover a wealth of historic monuments, great bird-watching and excellent walks on the lovely Isle of Orkney, just a ferry ride from the Scottish mainland

Thankfully, the hour-long-crossing of the Pentland Firth was smooth. And we watched in awe as puffins and razorbills flew together in formation, very low across the water, while black guillemots dived on the approach of the ferry. We were finally on our way to the Isle of Orkney. 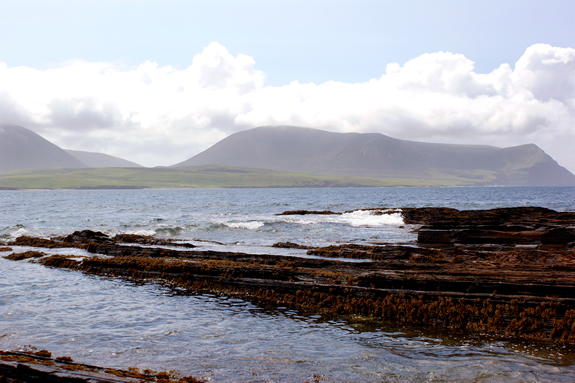 After docking at St Margaret’s Hope, on the island of South Ronaldsay, we drove north across the Churchill Barriers. These four causeways were built during WWII to block the eastern approaches to Scapa Flow, and they link the islands of South Ronaldsay, Burray, Glimps Holm and Lamb Holm to the Orkney mainland. Using the causeways we reached the Pickaquoy Centre campsite, on the outskirts of Kirkwall, in good time. 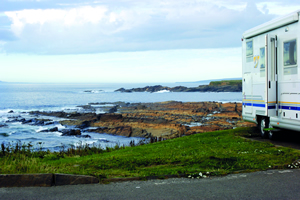 A wonderfully scenic parking spot at the Point of Buckquoy, by the Brough of Birsay

The next day, we drove to Mull Head Nature Reserve, where we set off on a three-and-a-half mile circular walk, passing the Gloup, a partially collapsed sea cave. The Orkney Islands offer some great walking opportunities: there are lots of paths that can be followed, no matter what your abilities. Further along the cliffs, we came to the Brough of Deerness, where the early stages of an archaeological dig lay close to the remains of a small, stone pre-Norse chapel. Out on the sheer cliffs of Mull Head, kittiwakes, razorbills, shags and fulmars were nesting, harassed by several great skuas who would much rather pinch someone else’s food than catch their own.

At Tormiston Mill, we joined a guided tour of Maeshowe, a 5000-year-old chambered tomb. Bent double, we entered the low passage, lined with eight metre-long stone slabs. At the winter solstice, the perfectly aligned passage allows the rays of the setting sun to illuminate the far wall of the 5sq m main chamber. The walls, inscribed with Viking graffiti in the form of many runic carvings, rise to a steeply corbelled roof, supported at each corner by a standing stone. The precise and neatly cut stonework of the interior contrasts strongly with the soft outer contours of its grassy mound. There’s more history to be found at the Stones of Stenness, a short distance away. They were erected 5000 years ago and form the earliest example of a stone circle in the UK. Of the original 12 stones, only four still stand, but at almost 6m tall and very narrow, they are still impressive. Nearby, the huge megalith known as the Watchstone stands guard over the narrow causeway between the two lochs, leading to the Ring of Brodgar.

Here we met the Historic Scotland ranger for a guided walk around the stones. One of the largest of all the Neolithic henges, this spectacular stone circle measures 130m in diameter.

We then headed west to the village of Skara Brae, Orkney’s best-known Neolithic monument. The shortage of timber on Orkney meant that not only buildings, but also domestic furniture were constructed of stone. We climbed up onto the grassy bank to look down into the single-roomed houses, with their central hearths, stone dressers and two or three bed boxes around the walls. The settlement is the best preserved of its kind in northern Europe and was inhabited from around 3100BC to 2500BC. After its abandonment, the village gradually became buried beneath sand dunes and this, combined with its subterranean construction, has contributed to its remarkable state of preservation.

The next day we walked from the campsite into Kirkwall and looked around the shops on the main street. Kirkwall has the only large supermarket in Orkney – which has now been joined by a small Tesco – and is the departure point for most ferries to the northern islands. St. Magnus cathedral dominates Kirkwall. Norse Earl Rognvald began construction of the cathedral in 1137. While much of the ancient detail carved into the soft red sandstone has worn, some is still visible on the 12th century parts of the building.We then drove west overlooking the wide expanse of Scapa Flow, to Stromness where we found plenty of space to park, even for our 8m-long ’van. A more picturesque town than Kirkwall, the old houses on the waterfront still have their own quays in the harbour, where merchant boats came to trade in centuries past.

Following the coast, we walked around the Point of Ness headland, overlooking the small flat island of Graemsay, which contrasted strongly with the steep island of Hoy beyond. In the shallow waters close to shore, common seals were floating on their backs and further along a few were basking out on the rocks.

We then drove to the Tomb of the Eagles which is located at the southern tip of South Ronaldsay. In the visitor centre we were given a very interesting talk by the on-site archaeologist and were encouraged to handle the pottery, stone implements, bones and sea eagle talons found at the site. We found this a refreshing change from the usual audio-visual introduction and dry artifacts kept behind cases. A short walk away, along the dramatic cliff tops, the long, low mound of the Neolithic Tomb was in an exposed position, only a few feet from the cliff edge.

Laid flat on a wooden trolley, we hauled ourselves along the very low, dark entrance tunnel using an overhead rope into the interior of the chamber. Inside, the walls were above shoulder height and lined with several sets of twin standing stones. At either end, large separate chambers were lined with single slabs, while on the long walls were three smaller L-shaped chambers, one of which was furnished with a row of sculls. We really enjoyed our visit to this cairn, as we were left to explore at our leisure, without being herded in and out by a guide. 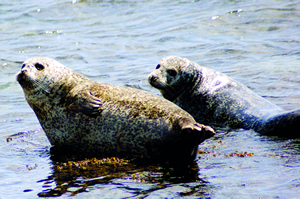 Common seals were floating on their backs and further along, a few were basking on the rocks

The next morning we decided to have a look at the Earth House on the nearby industrial estate before heading north. However, finding nowhere to park, we began to turn around when... ‘crunch’. We’d reversed into a road sign, which broke the rear light and cracked the bumper. An angled fence post had also punctured the aluminium of the back wall.

While assessing the damage, a very helpful local man stopped to help (another ’van owner, of course) and took Keith to the local motor factors. He also gave us the number of a local body shop where we took the ’van that afternoon for an estimate.

We returned two days later and Eddie, the owner of Scapa Garage (tel 01856 876575), went to considerable trouble, allowing us to camp on the forecourt and also loaning us a car. After contacting Bürstner UK for the paint codes, he then had it specially mixed and shipped in from Inverness. Meanwhile, the new light fitting was ordered from Germany. A week later, Eddie had finished and we were pleasantly surprised to find his bill was still within the estimate, even if time had been a little elastic.

Relieved that the ’van was back in one piece again, we drove to Aiker Ness on the northern coast of the mainland, where we found the Broch of Gurness. The best preserved of Orkney’s Iron Age brochs, it was originally one of 11, along both shores of the Eynhallow Sound.

Later, we drove around the northern coast to Birsay, settling for the night in a stunning position on the Point of Buckquoy, with the sea on three sides of us. The noise of the waves increased with the incoming tide, crashing against the wide expanse of rocks surrounding the point. The next morning, with the tide just low enough, we crossed the narrow zig-zagging causeway to the Brough of Birsay – a small, but steeply sloping tidal island. On the lower slope and enclosed within a complex of monastic buildings was the remains of a 12th-century Norse church. The surrounding Norse settlement of many longhouses was quite substantial, overlying an earlier sixth century Pictish settlement, now mainly indistinguishable. From here, we circled the island, following the edge of the windswept and often overhanging cliffs.

Back on the mainland, we walked along the cliffs to Skiba Geo, an inlet where an old fisherman’s hut was surrounded by a set of boat-shaped hollows in the ground, known as ‘nousts’, where fishermen have stored their boats during the winter for centuries. Perched on the cliff edge was a whale vertebra, an odd looking structure erected in 1876 from the remains of a beached whale. Further along, a colony of acrobatic arctic terns were feeding their young on the sea stacks.

We loved the spectacular views from the 85m-high cliffs of Marwick Head, north to the Brough of Birsay, and watched the comical aerobatics as young fulmars practised their flying technique on the up-draft created by the cliffs. 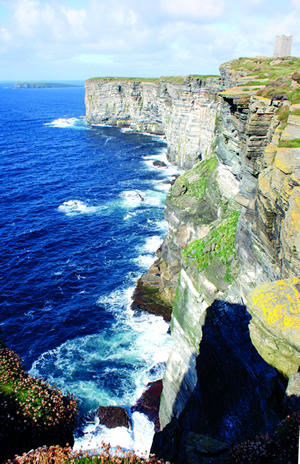 On the beautiful and very remote windy cliffs at Yesnaby, we parked in the lee of a WWII gun battery, giving us a wonderful 180° view out to sea. We walked south along the deeply carved coastline, said to be the most spectacular in the whole of Scotland.

We climbed up onto the headland of the Brough of Bigging, then on round the cliffs, past the old quarry at Qui Ayre and on to view the sea stack known as Yesnaby Castle. Returning on an inland route, we crossed the heather-clad maritime heath, where bog asphodel grew in the wetter low-lying areas.

Northwards along the coast, we found the tiny and exquisite Scottish primrose, a rare endemic species, only found at Yesnaby and in a few places on the northern coast of Scotland. We were lucky enough to catch the end of its second flowering, in late July.

Reluctant to leave the dramatic scenery of Orkney with its wonderfully remote, wild places and welcoming people, we returned to the ferry at St Margaret’s Hope. After a calm crossing, during which we saw seals and harbour porpoises, we docked at Gills Bay and drove east along the coast to John O’Groats, where the first thing we were greeted with was a sign stating: ‘No Overnight Parking’. Welcome back to mainland Britain!