Find Fort William on a map, then look a little further north and slightly to the west and you will find Glen Shiel. 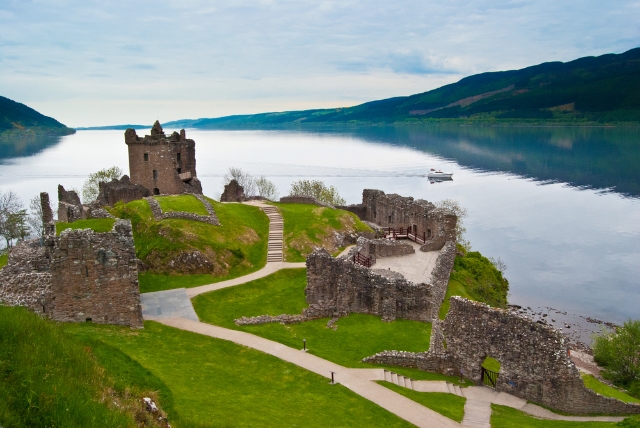 Nestling at the foot of the Five Sisters of Kintail, by Loch Duich, lies the hamlet of Morvich. It’s in a flat valley at the head of the loch and the Caravan Club has a wonderful site there, which visitors usually pass by as they travel to the Isle of Skye. 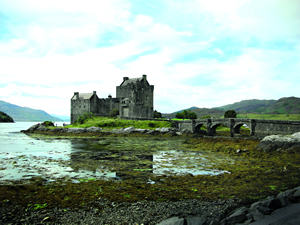 Morvich is located amid some of the most magnificent scenery in Scotland. A lot of the land around this area belongs to the National Trust for Scotland and the Countryside Commission has dedicated much of it as a National Scenic Area. Serious walkers will park their cars at Dorusduain and walk up to the Falls of Glomach. Sometimes called the Hidden Falls, they are among the highest in Britain, tumbling down a steep narrow 750-foot cleft, with a single leap of water of 350 feet. The round trip takes about five hours. For the ‘munro baggers’. there’s plenty to choose from around here. A munro is a Scottish mountain above 3000 feet and each time one is climbed, it is ‘bagged’. The National Trust has an office next door to the site, so it’s easy to get all the information you require.

I booked our pitch at the site online as usual, so when we arrived Alisdair and I received the marvellous welcoming reception that we have come to know from the clubs’ wardens.

“Do you have a television on board?” a female warden asked me.
“Yes, we do,” I replied.
“Well, you’ll need one of these,” she said as she held up
a length of white cable with TV connectors at either end.

Because the site is surrounded by mountains and TV reception is very poor, the site has a central aerial which is wired to every pitch. So no matter where you park, you can plug your lead in and get a great picture.

The £12 fee for about 10 metres of cable seemed reasonable, so as we returned to our pitch with the cable, I couldn’t help noticing how many other vans and motorhomes had the white cable trailing from hatches and windows.

On our first morning, the weather was clear and bright, so we decided to drive up to Applecross. We’ve visited here once before while staying at Torridon but we went round the coast road to Applecross. This is the recommended route if you choose to take your van there. This time, however, we were determined to go ‘over the top’, over Bealach na Ba, ‘the pass of the cattle”. As we started on the road, I was amused by the first sign we saw, “Road normally impassable in winter conditions”, and as we climbed I understood why. You really need a head for heights, because the road rises some 2400 feet, making this the highest stretch of road in the UK, with views that are nothing short of breathtaking. Go over the top and you’ll be rewarded with a panorama of the islands of Raasay and Skye.

In 672 AD a monastery was built in Applecross to give sanctuary to any fugitives, and until the road was built in the 1970s, it was one of the most inaccessible areas of mainland Britain. The Applecross Inn now offers wonderful sanctuary to all its visitors. We stayed for lunch and had an excellent meal.

We phoned ahead to the Applecross Campsite to see owners Clive and Maureen Goldthorpe, who remembered us from our previous visit to the area. The site is on the hillside above the village and has lovely views out to sea. This location is also steeped in history; Clive told us about the Time Team crew visiting to dig next to the campsite last year.

This is a great family site complete with internet connections in the wonderful café, which is housed in a flower tunnel and has lots of homemade goodies on sale.

On the way back to Morvich, we went round the coast road and couldn’t resist calling in at Shieldaig, one of the prettiest villages we’ve ever seen. It was founded in the 1800s by the Admiralty as a nursery for the Royal Navy – they were particularly short of seamen at the time, so they gave grants to people to live there. All the houses lining the shore are painted white. Behind them are the mountains of Torridon, some of the oldest rock formations on this earth.

A further small detour took us by the village of Plockton, which achieved fame through the television series Hamish MacBeth. Its picturesque, neatly painted cottages line the tiny harbour on Loch Carron, and the palm trees scattered around remind you how mild the climate is. In the height of summer it is packed with tourists, yacht enthusiasts and artists. It is said that the light here in the summer has a clarity that attracts the artists. With numerous pubs and cafés, it can get very busy. The tiny streets don’t allow much room for cars but walking around is a real pleasure.

The quintessential Highland castle, the most photographed and well-known scene in all of Scotland – Eilean Donan Castle – lies at the head of Loch Duich.

It is set on a rocky islet in the loch and access is across a small bridge. The beautiful natural backdrop has to be seen to be believed. The 13th-century castle started as the stronghold of the MacRaes and was all but ruined in 1719 by naval bombardment. However, the present day castle and bridge we see are mostly due to the restoration of 1912. It is definitely worth having a good look round. The kitchens fascinated me: they have been very carefully recreated – I’m not sure I could produce the food they did in such conditions. It has a very good visitor centre, coffee shop and gift shop. We even found the ubiquitous lone piper. 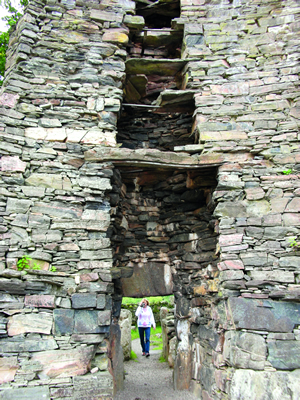 The entrance to the ancient 10m-high Dun Telve broch.

We both share a love for our past so we just had to spend some time down at Glenelg. The present scenic road from Shiel Bridge to Glenelg mostly follows the line of the old military road. There is a small harbour at Glenelg where a wee ferry still carries cars and passengers (not caravans though) over the sea to Skye, but only in the summer months. This used to be the main crossing point over to Skye, a historic droving route where cattle going to market would be encouraged to swim across this narrowest of crossings, albeit very fast flowing when in flood.

Just to the north of the village lie the ruins of Bernera Barracks built after the Jacobite rising in 1715 as part of a series of measures intended to “prevent insurrections of the Highlanders… and to hinder rebels and attained persons from inhabiting that part of the kingdom”. This was one of the few barracks where the men built their own lodgings within the barracks, for the married men to live with their wives; normally women were not allowed in barracks.

What we really wanted to see, though, were two of the best-preserved Iron Age Pictish forts, or brochs, of Dun Telve and Dun Troddan. The broch is a peculiarly Scottish type of fortified homestead built around the 1st century BC. They are circular in plan with high – up to 50 feet – dry-stone walls of great thickness containing chambers and stairs. There were no external openings except a tiny but well-protected entrance. The masonry work was good on the exterior, so smooth as to make climbing them impossible. We were amazed at the workmanship and how sturdy even the ruins appear. To say they have stood this length of time is a tribute to the men who built them. Alisdair ventured up the stairs between the walls even though they were only about 18 inches wide in places. Absolutely astounding! These are not the only brochs around here. Further up the valley on a cliff top stands Dun Grugaig and on the opposite shore to Eilean Donan, overlooking the junction of Loch Alsh and Loch Duich, stands Caisteal Grugaig.

Just a short drive up through Glen Shiel and on up to Invermoriston and we arrive at Loch Ness. Some people believe in the monster and others don’t – but a visit to Drumnadrochit will soon convince you. This small stone village sits right on the side of Loch Ness and is the centre of the world for the Nessie aficionados. The whole ethos of the village is dedicated to the Loch Ness Monster, complete with an exhibition centre. Please note, I do not use the word ‘myth’ because I am a believer. The monster shows herself very rarely but as the loch is some 24 miles long and about a mile wide with depths of up to 754 feet, she has plenty of space to hide. For the adventurous ones, there are boat trips on the loch with sonar scanning, and even a submarine.

Just to the side of the village is Urquhart Castle, or what’s left of it. It was blown up in 1692 to stop the Jacobites from taking it over. These romantic ruins sit out into the loch and it’s a good spot to watch the water for strange beasties.

The main road continues along the loch side to Inverness. We travelled a little further north but not all the way into Inverness (that’s for another trip). We went to look for the first lock on the river at the head of the loch as we suspected our old boat was moored there. Much to our surprise, just as we arrived, so did she with her new owner. We have done a lot of sailing in our past and it was very nice to see that new owner Graham was having as much fun with her as we did.

It’s behind you! Breathtaking views everywhere you look!

I have to say that we now look upon our caravan as a boat, but one which travels on land.

Just at the side of the lock we found a little restaurant called Oakwood Scottish Restaurant, so we decided it was lunchtime. Above the door it said “food and curios” so in we went. What an amazing little place – we literally sat in an old antiques shop and had a marvellous lunch. Fascinating! We soon decided that our return journey would be via the south side of the loch, not a well-trodden path.

Just a little over halfway down the loch is the Farigaig Forest Centre. The old stone stables have been converted by the Forestry Commission into an Interpretive Centre, demonstrating the forest wildlife and conservationist practices. There are some lovely walks and a picnic area. Nearby is the village of Foyers (with yet more waterfalls) and then Fort Augustus.

The village of Fort Augustus spans the six locks that bring the Caledonian Canal into Loch Ness. The actual fort was built after the 1715 Jacobite uprising but the 19th century St Benedict’s Abbey now occupies the site of the fort, which in turn is now a heritage centre. For keen walkers, the Inchnacardoch Forrest Trail begins just two miles from the village centre.

As always the scenery just astounds us. It constantly changes with the angle of the sun and the gathering clouds throughout the day. The vistas appear and disappear as the weather changes but always the colour and magnificence of it all leaves us breathless.