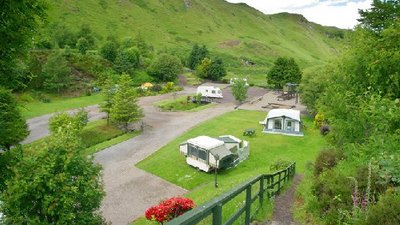 ROSEVIEW CARAVAN PARK (formerly Oban Divers) can offer you a quiet caravan park for campers, touring caravans and tents in a beautiful setting that has been developed over the last fifteen years.
There are many uncommon birds around, even to a pair of golden eagles this year.
Sorry, definitely no dogs allowed.

I’ve been visiting (Oban Divers) Roseview on and off since 1993 and again with my young family in 1995, it’s a beautiful campsite in a great location, the owner was very nice friendly, several years later when I visited the site was managed by a nice gentleman called Ian, who was always chatty and willing to help with anything.

A few years later the site was being managed by the owner, Mike and his girlfriend Fiona, we never really had anything to do with Fiona, as every time we needed to speak to someone it was Mike. Mike is a very friendly, laid back type of person, always willing to have a chat, we’ve had a great time every time that we’ve stayed here, fellow campers have always been polite and friendly, we have often had BBQ with others, whilst being respectful and keeping the noise down.

This year Mike put us on a pitch at the top of a hill, not too far from the camper’s kitchen and the BBQ area, the first night there the weather was appalling, very windy and raining heavily. The next day Mike offered us another pitch in a more sheltered area, but we declined as it takes us about 90 minutes to put our tent up and get everything sorted inside.

Two days into our holiday there was people laughing and talking loudly until gone 12:30 despite the rules stating that “noise should be kept at a minimum after 11 o clock otherwise you shall be told to leave”. My wife sent a text message at 12:30 informing the owners of the situation. The next day we were again offered to move to another pitch which we politely declined, when we got back to the campsite at around 6 o clock, after a day out Fiona came to see us saying that we were trouble causers and we had 30 minutes to pack up our things or the police would be called, we tried to get Mike to come and see us but Fiona came again telling us that she would give us a refund and we had 1 hour to get off the site, I tried to talk to her but her anger was at such a level that she was being totally unreasonable and aggressive, she even called us troublemakers, I’ve never ever been called a troublemaker in my 53 years. We started to pack things away Mike came to us and said that he couldn’t kick us off the site at that time of night and that we could stay the night, but we had to leave in the morning. Fiona upset my wife so much that she had a bad asthma attack.

The next morning after we had pack up and loaded the car, I stopped at the reception to ask for our refund and despite we had 3 more days’ left, worth £95 Fiona gave me £20 and said that’s all we were getting, with a bit of attitude behind her voice.
Despite the replies that Fiona gives via Trip advisor and other review sites, she always blames the campers, and lies about them, as other reviews have shown, she can’t take any criticism at all, constructive or otherwise, not really a good way to run a business.
I recommend that Fiona seeks some anger management counselling so that she can improve her people skills https://www.psychologytoday.com/gb/counselling/sct/oban

Well just what a surprise I found when I drove into this fantastic site. Someone has gone to a lot of trouble to landscape and make this site really NICE for those wishing to use it. The site manager Ian is a perfect gentleman, with a good sense of humour and will make you welcome the moment you arrive.

The toilets, showers and other facilities are totally immaculate, spotlessly clean and very well designed and thought out. I couldn't fault a single thing here. Every facility has been carefully and purposefully designed and well thought out.

The fresh water tap has been designed as a little wishing-well complete with a wishing well roof on top, I really smiled when I went to fill-up the kettle.

A small burn runs through the centre of the site, with well kept grassy banks and fascinating little named bridges crossing it. A colony of tame Eider ducks will keep you company, though always looking for those scraps of food they seem to love.

The childrens play-area is both attractive and safe and has some lovely features which young scallywags will love, including a small playhouse on stilts.

Another nice feature I've not encountered before is that each parking spot has a four seater picnic bench beside it, really nice and very useful. Just another pleasant touch the site provides.

The site is a short distance from Oban, extremely quiet and very peaceful, I've spent seven nights here and was never disturbed at all.

Having travelled considerably in my small VW Camper Van, I've visited many sites throughout the UK and I consider this ROSEVIEW site the finest I've ever had the pleasure to stay on.

I'll close by saying "well done to the management and owners of this site, you are people who have gone to great lengths to make your campers and caravaning guests feel as welcome as possible."

This site is most convenient for those wishing to use the CalMac Ferries departing from Oban and its approximately 10 minutes drive from the ferry terminal.

It has good internet access - I've been using '3' all the time I've stayed here, with no problems. The site owners are even considering installing Community Broadband, which just goes to show how much they are trying to improve the site and its everyday facilities for their guests to enjoy.

For me - most definately a 10-out-of-10 site! I'm totally sure you won't be disappointed if you choose to stay here.