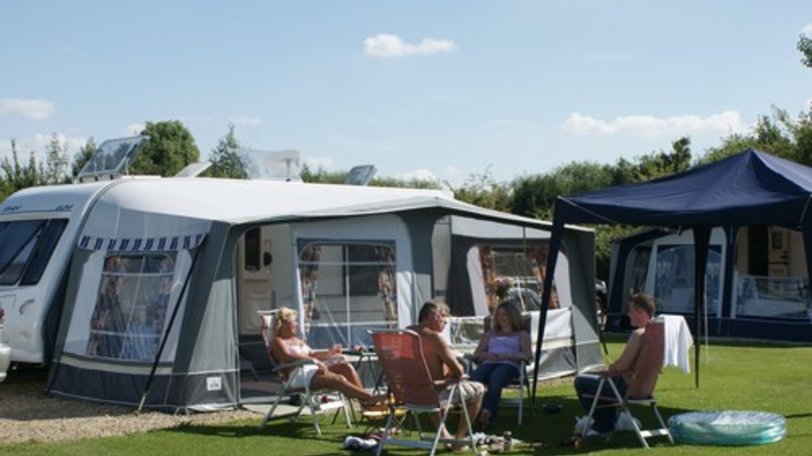 Ranch Caravan Park is a family owned holiday park set in the inspirational surroundings of the Vale of Evesham, one of the most beautiful pieces of landscape in the whole Worcestershire countryside. This family friendly park is open from March to November every year, offering a number of touring pitches that are open for caravans and motorhomes only. Ranch Caravan Park also features a small number of holiday homes for rent, as well as almost 200 privately owned ones that are a permanent feature, giving weekends and school holidays at this popular Worcestershire holiday park a real community feeling.

The park makes great use of the natural terrain, with many of the pitches strategically situated to ensure some degree of privacy for everyone taking a holiday here.

Ranch Caravan Park also offers a wide range of facilities, meaning that holidaymakers looking to retreat there and stay on site for their break are able to do so without a worry. An on-site convenience store is available for purchasing your essentials, while those looking to indulge can make us of the great bar, restaurant, and takeaway food facilities that are available in the park.
Recreation opportunities for children and pets are also plentiful, with a children’s play area and games room available in addition to acres of open space for ball games and other sports, and there is even a dedicated dog walking area if you have decided to bring your pet along for the break.

Outside of the holiday park, you will find many of the most popular locations in the area within easy reach. The riverside towns of Evesham and Stratford-upon-Avon are excellent for either relaxing walks ordoing a spot of shopping, while there is miles of countryside and farmland open for you and the whole family to enjoy.

Directions to Ranch.
From the A46 Evesham bypass take the B4035 signposted Chipping Campden. Continue through the villages of Badsey and Bretforton. After passing over the old railway bridge on the approach to Weston Subedge turn left at the crossroads to Honeybourne. Continue straight over the village crossroads towards Bidford-on-Avon, our entrance is 400m on the left side.

The riverside towns of Stratford-upon-Avon and Evesham are ideal centres for shopping or a relaxing day out and the picturesque Cotswold villages of Broadway and Chipping Campden are all within 8 miles. We are an ideal base from which to tour the Cotswolds there are many unspoilt villages a little off the beaten track that are worthwhile discovering, they often have charming restaurants and traditional country inns as well as interesting churches, historic houses and beautiful gardens to visit. The elegant spa town of Cheltenham and Elgar’s city of Worcester are within a 30 minute drive.

Stayed at the Ranch for the second time in 12 months. First time last year was great no problems at all. This May bank holiday what a nightmare!!! With in half hour of arriving, put on the kettle and the mains tripped. Thought may be just a blip? Boy, was I wrong? Every time we turned on a Tv, Kettle,water heater, anything really, the mains would trip out! To cut a long story short, we spoke to two members of staff who informed me that I must have a fault on my van or all the items I was switching on. I was then told to switch everything off and only use one item at a time as I must have faulty items and the site was only a 10amp site. I told them when we stayed there last year I used the same items and more at the same time with no problems at all, and I have just had the van fully serviced and had the same service company re-check the electrics on my van as I explained to them the comments made by the Ranch staff. They have once again gave it a full pass om both the electrics and gas system? I have e=mailed the Ranch and explained once again, also that two other campers next to me had also had the same problems and for a few days longer then me, my reply was a basic ( I have a faulty van, electrical items, and there site is much better then most of the others!!!! So, would I return there? No way!
There are many better sites out there where you do get the respect as a paying customer. We are part of a large group of campers and word of mouth does mean a lot. As I Have already said in my review, I only had on a 1800watt kettle when the electric tripped out! Then the next time was a small tv! And my electrics have once again been checked and passed. I will email the ranch the paper work but find there response was they are not interested!

Stayed at this park in the off season and was impressed at how clean and tidy it was. Staff were very welcoming and we are looking forward to returning in the summer season to take full advantage of the attractive facilities that are on offer here.

Easy to find, well sign posted. The weather over the last 3 weeks had been almost constant rain, meaning the tractor had to tow caravans onto the grass pitches. Unfortunately within 24 hours the weather got even worse & our awning was 'swimming' in mud, as was most of the rest of the grass! The all weather pitches looked good (they were all taken) and the site was good for the kids with a well kept play area and plenty of space for football, cricket etc. The pool had only just opened for the season & although it was a good size, the water was cold (not sure why it wasn't heated during our visit), Toilet & shower block in excellent condition, although only 3 showers in each m & f section. Overall, good level pitches, well spaced & good facilities.

We stayed on this site for a couple of nights in 2003 to break our 300 mile journey home from Devon.

A nice clean site with a playground for the children, and friendly staff. A nice little bar on site as well.