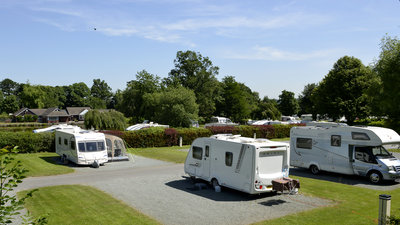 Stanmore Hall Touring Park, set in outstanding parkland in South Shropshire, is the perfect haven for the discerning caravan enthusiast.

The award winning park has the double advantage of being attractive in its own right as well as being the ideal location from which to explore the many attractions of the rural county of Shropshire.

Situated on the edge of the delightful market town of Bridgnorth, Stanmore Hall is within easy reach of other historical towns such as Ironbridge, Much Wenlock, Ludlow and Shrewsbury.

The luxury touring park stands in the lawned grounds of Stanmore Hall, a Grade II listed building. It comprises 12.5 acres of mature wooded parkland where caravanners can enjoy tranquil views of the central lake and its wide variety of wildlife, combined with the highest quality amenities.

Bridgnorth
one of Shropshire's most attractive small market towns. Dramatically built above and below a sandstone cliff face and divided between High Town, with its shopping centre and Low Town, alongside the River Severn.

The Ironbridge Gorge Museums
centred in the birthplace of the Industrial Revolution is acclaimed as one of the classical historical and archaeological centres of the world. The multi-site museum includes the Blists Hill Living Museum - well worth a visit for a taste of old Victorian England.

West Midlands Safari Park
in nearby Bewdley in Worcestershire, offers an hour long drive-through safari which covers 150 acres and is home to a variety of rare, exotic and unusual animals which roam the reserves.