Make sure you have a place to stay, these top parks tend to have great response times... 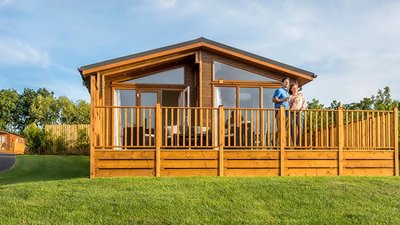 Beautiful award-winning holiday park in WIltshire. Perfect choice for a fun, family holiday with some adventures, various activities as well as plenty of relaxation for everyone.

We have 22 new holiday homes at the park for occupation this summer.

Wiltshire is rich with recreational opportunities all within easy reach of Brokerswood. The nearby towns are all equipped with great leisure and shopping facilities whilst more rural pursuits such as horse-riding, clay-pigeon shooting and even watersports are all situated within just a few miles.

Stayed for 7 nights at the start of August 2011.
Booked this site after internet research and looking at its website. We were travelling with our grandchildren and it was their first time camping.
The website looked good, giving details of a sheltered play-area for toddlers, which fitted our grandchildrens age group and an activity centre (in case it rained).
The site was very expensive compared to other sites we have visited (£27.00pn) and since we have been camping both in the UK and Europe for over 30 years we have a bit of knowledge.
However we were prepared to pay for what it offered.
On arrival the staff were great. Very friendly and this continued throughout our stay.
We have a ridge tent and did not require an elec. hookup. We were allocated a pitch in the top part of the camp, away from the hedge line that bordered a rather noisy country road that in the evening/night appeared to be a favourite of the racing fraternity.
Now we were aware that it was peak season, so the rest of my review takes this into consideration.
The pitches appear to have been sized according to the average ridge tent and did not take into consideration the invention of the more modern, multi room, family tents. Therefore it felt like a sardine campsite!!
Warning though, the roads throughout the site are prone to kick up a lot of dust when vehicles drive over them when the weather is dry.
The bathroom facilities are located by the caravan area, furthest away from the tents??
They comprised of 5 toilets and 5 showers. The gents had no urinals. I would suggest that when one considers there would be over 200 persons on the site this is not the best ratio.The lady who cleaned them was very good, but even she could not be on duty 24hrs per day.
After washing your hands, if that was all that was required, there was a blower in the main block which only blew cold air.
For the washing of plates/dishes, three sinks were provided, again at the toilet block, by the caravans not the tents. Usually there was a queue. (bring a plug).
There was one washing machine and one dryer, both appeared to have frequent problems.
The only facility for rubbish was down by the Toilet block. There were no other collection points on the site. There were a number of large bins for the rubbish and within a couple of days these were overflowing. I mentioned this to the staff who stated that the bins are emptied twice a week. This was not the case.
Now as for the childrens playarea.
On the site there is one wooden train with carriages for the children to play on. It was super easy for the children to fall off the roof.
The park area, which is located on the otherside of the fairly busy single road, is open to the general public for a small entrance fee. The visitors, of which there are many, drive up to the car parks and park beside the camp site, thus allowing easy access, over a small ditch, to the camping area, should any individual choose to enter.
The play area, which is quite good, is located adjacent to this single road, opposite the busy car park. Me thinks whoever planned this had not considered the fact that children do like to run about!!!. Even better planning was considered for the "covered" play area, which was partially covered, for the use of under fives. This is also located beside the single road, however this time by a bend in the road. There were none of those signs that the highways put up stating how many accidents in the last year!!!
A word of warning for those with children, yes there is an activity centre that run a holiday club, it costs £20 a day.
The other thing that amazed me was the fact that they charged you for freezing ice packs. It may be commonplace, but this is the first time I ever had to pay.
Yes the park is nice and the staff were very friendly, but it has not been designed for overnight campers and how it got into the Practical Caravan's Top 100 Sites I do not know. It was not value for money.

Firstly, the good points:
The park has very good facilities, toilet blocks are clean, pitches are large and you have unlimited access to the Country Park. Saw a couple of people waiting a few mins for a shower, but usually enough to go round. Washing up area is fine, and there is a security barrier to get in. The country park is brilliant for kids up to about 13 – there are 2 areas of adventure play (one aimed at younger kids, one older), a small train and a large lake with loads of ducks (you can buy bags of feed for 50p from the shop). The road running outside the camp is a bit noisy at times but nothing major. We were unlucky enough to have a military exercise from Salisbury taking place when we were there, which involved a Hercules aircraft flying over about 5 times at midnight but I reckon that’s pretty unusual!

We set up our 2 tents on adjacent pitches, took out our small metal BBQ to cook dinner (and keep us warm!), and proceeded to have a good evening sat around with a couple of beers, just talking and having a few laughs and went off to bed once the Hercules stopped flying over at about 12.30.

Next morning it all went downhill…. We were sat having breakfast at about 10am when the owner came marching over to us with a very aggressive attitude. She said she had had complaints that we were too noisy, and then said “And I can see from your empties that there has been alcohol involved and we have a zero tolerance policy on unruly behaviour and alcohol” (and she was jumping to conclusions here – more about that below!!). We apologized and pointed out that we were just sat around talking and no-one came over to speak to us at all? She said it wasn’t good enough and we were expected to be quiet by 10pm that night and we would be checked on by the night warden – if we were deemed to not be complying by being inside our tents silent then we would be asked to leave in the middle of night (even though we had a small child with us).

Let’s just put this in perspective – we are not a group of 20yr old students, we are four professional 36-41yr olds (inc. a teacher and a Company Director of a large International company) travelling with a 4yr old. Said child went to bed before 9pm in the tent right next to us and slept straight through it all, so could we really have been THAT noisy?? What we drink is our business, we weren’t drunk, and we also had taken 2 empty gallon bottles of scrumpy cider that we were using for WATER but the owner obviously decided in her head that those had been full of cider and we had drunk them all! No-one came over and said anything to us at the time (we would’ve made sure we were very quiet if someone had come over and spoke to us) and we were almost at the far end of the site from the toilets – during the evening we all went to the toilet block a couple of times and couldn’t hear any noise when we came out. In retrospect, the campsite was VERY quiet after about 9.30, which we found highly unusual, but I reckon it’s probably repeat visitors who know the Rules! On the flip-side, we didn’t complain about the kids tearing around shouting and playing football at about 7am, but that’s because that’s what camping is like! The Welcome Pack had a sticker on the front saying ‘No noise after 11pm’, but we presumed that was no music or shouting - not that you were expected to be inside your tent and silent by 11pm!!

And none of this would have been a problem if we’d known this up front. If that’s their rules then it’s fine. We would just have chosen to stay somewhere else. But nowhere on Brokerswood’s website, or on the booking confirmation they sent us in the post (which was after we’d had to pay the full amount up front), did it make any reference to the campsite policy being complete silence after 11pm. If they had said that we would have just cancelled, as no way would we have been able to go to bed and go to sleep before 11pm. Between us there is a lot of camping experience and we’ve never came across a site with those conditions – half the point of camping is the whole ’sitting up talking by candlelight’, surely?

Needless-to-say, we didn’t stay there the 2nd night (so was expensive camping for 1 night!). We went out to Longleat for the day (highly recommended!), then came back and packed up the tents – all 5 of us drove back to my house in Gloucestershire and continued our holiday there by setting up the BBQ fire in our back garden and sitting out toasting marshmallows on it (as we had promised our child), having a few glasses of wine and a bit of a laugh. And none of my neighbours had a problem with any noise we were making!!

In summary – if you are a family who are all in bed by 10.30pm and up at 7am, then this site is 100% perfect and you’ll have the most fantastic time. If you like to have a few late nights and a few laughs on holiday, then go to a normal campsite where that’s fine, and avoid this one!