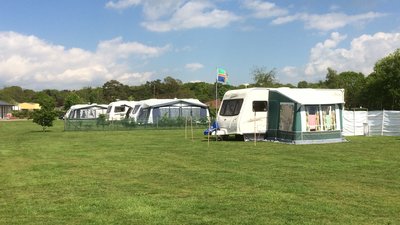 Enjoy a visit to the lovely Lincolnshire village of Woodhall Spa with a stay at Petwood Caravan Park.

This is an award winning campsite, as it has featured in the Top 100 Sites Guide put together by Practical Caravan and Practical Motorhome magazines and Caravan Sitefinder in 2013 and in 2014. As just one of nine sites listed in the Eastern England region of this go-to guide, it is surely one of the best campsites in the UK. The site also has a four-pennant AA rating as well as four stars from EnjoyEngland.

Caravans, motorhomes, RVs and tents are welcomed at Petwood Caravan Park to stay on the 98 pitches, eight of which are hardstanding and all of which have 16A electric hook-ups.

Guests have the use of the two modern shower and toilet blocks that are heated and have disabled facilities. There are also two laundrettes, one at each amenity block, both of which have a washing machine and a tumble dryer. Those staying on site can also use the park's microwave and ice pack freezing facility.

This is a dog friendly campsite, up to two hounds permitted at each pitch, at no extra charge – plus, there is a dog walking area at Petwood Caravan Park.

You can keep stocked up on your holiday essentials at the campsite's shop, while there is a newspaper service at weekends and in high season. There is also a library with reading material for children and adults to enjoy.

Plan your holiday's activities at the campsite's tourist information point – and you won't be disappointed, there is lots to do in the surrounding area. Petwood Caravan Park is close to the centre of the village of Woodhall Spa, through which the B1191 runs, this road taking you to the A158 near Horncastle to the north, from where you can easily explore the area. Or drive north west across country and visit lovely Lincoln, with its cathedral and castle. Fancy a round of golf? Woodhall Spa Golf Club is very near this campsite.

This is a stunning part of the country, indeed its beauty is often overlooked. Meander through the countryside and visit Bardney Limewoods National Nature Reserve on your camping, motorhome and caravan holidays in Lincolnshire, one of many places across the county where you can learn more about the natural environment. There is also the Lincolnshire Wolds Area of Outstanding Natural Beauty, dotted with pretty villages, including the birthplace of poet Alfred, Lord Tennyson, as well as rolling hills, streams and much more.

For something a bit different that is sure to keep all members of the family entertained, why not take a 20-minute drive from this campsite to the Lincolnshire Aviation Heritage Centre. Based on a 1940s RAF Lancaster bomber airfield, there are a range of events on throughout the year – the site even hosts dances and concerts.

And, of course, you are also less than an hour from the Lincolnshire coast which is well worth a trip on your camping and caravan holidays. Skegness is about a 45-minute drive from Petwood Caravan Park, as is Ingoldmells – and while you're over there, you can take time to enjoy Gibraltar Point National Nature Reserve.

The Battle of Britain Memorial Flight Visitor Centre is 5 miles south of Woodhall Spa, which now operates a Lancaster, five Spitfires, two Hurricanes, a Dakota and two Chipmunk aircraft. All based at RAF Coningsby a front line airbase, home to 3, 11, 17 and 29 Squadrons flying the Typhoon.

The Lincolnshire Aviation Heritage Centre is a family run museum and was set up over 20 years ago. It is now widely seen as a living memorial to the 55,500 men of Bomber Command who lost their lives during WW2. It holds one of the rarest aircraft, an Avro Lancaster Bomber, in its collection along with many wartime vehicles including a Ford WOT1 Crew Bus, the only one of its kind known in existence.

Woodhall Spa has a variety of attractions including two top class golf courses at the National Golf Centre, voted best inland course in the UK by Golf World Magazine. The village also offers a unique cinema, Kinema In The Woods, which opened in 1922 and still shows films using a rare original rear projection unit. Alternatively you could spend time at the heated open air swimming pool adjacent to our site.