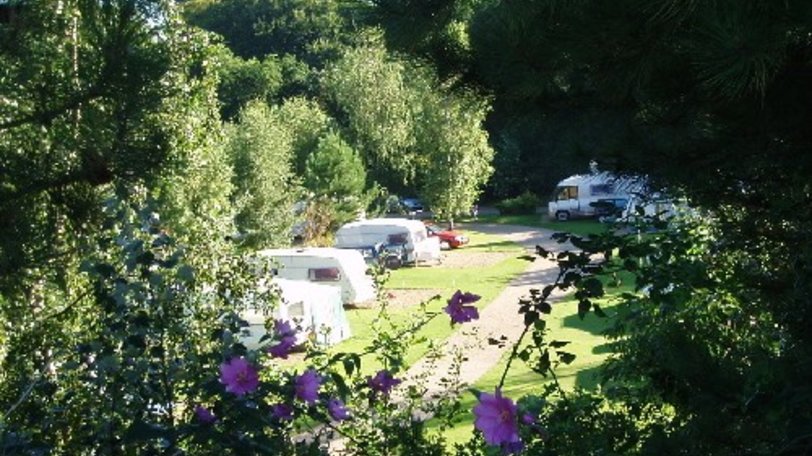 We invite you to stay at our secluded and sheltered country park EXCLUSIVELY FOR ADULTS.

Two Mills has been awarded 'Campsite of the year for the Heart of England 2012'.

81 hard standing pitches, all with electric, full service super pitches also available. Centrally situated in North Norfolk, 1 mile South of the small town of North Walsham it is the ideal haven of peace and quiet from which to explore the delights of this unspoilt corner of the country. We welcome visits before you book.
OPEN CHRISTMAS & NEW YEAR.

8 miles from Cromer
12 miles from the historic City of Norwich
7 miles from Wroxham the Capital of the Norfolk Broads
National Trust properties and Wildlife centres/Nature reserves within a few miles
Adjacent to quiet lanes, cycle routes, and Weavers Way Walk. country inn nearby

Beautiful, friendly park, with excellent facilities,
Hard standing good size pitches with lovely surroundings.
Disabled facilities very good and spotlessly clean.
Lots of places to visit, and some nice walks.
Shop in reception with all the last minute things you forgot.
We will be staying again, thank you to Ray Barbara Jane and Roy for making our stay so special.

We booked to stay as it appeared highly recommended by the Best of British. Having just worked considerably long days we were looking forward to a few days break. Upon arrival received a warm welcome from the staff / owners and were shown to our pitch. Having owned a caravan we decided this year to go back to camping in a tent. Once at the location of our pitch it soon became apparent that we were discriminated agains for only having a tent by being placed on what appears to be the smallest pitch on the site. Caravan users are given enough space for their van and awning along with a grassed area to sit out by. We were given barely enough room to pitch the tent between the trees and gravel road surface. When the car was then parked we were left with a very small area to sit. Despite the site being 51 pitches in size the pitches are situated very close together providing little privacy. The site is however very clean and tidy and well maintained. The toilet blocks are clean but on the small size making showering difficult. The showers are also rather annoying as you have to keep pushing the button for water. This last for no more than 15 seconds at a time despite the owners stating it stays on for 90 seconds. We would not consider using this site again.

It is always disappointing when a guest who has a problem of any sort does not come to tell us while they are here as we may be able to do something about it then but can obviously do nothing once they have left. I strongly object to the assertion that we discriminate against tents. This booking was made two days prior to arrival and only one regular pitch, the grade required was available for the four nights needed so no other regular pitch could have been offered to them or anyone else. A super full service pitch was available but at a higher price. When booking the tent size was given as medium, it is necessary to have the approximate size of area the tent requires as the park was developed years ago as a touring caravan park & it is essential that the tent fits reasonably well on the hard standing part of the pitch as it is not allowed to spread onto the grass parking /sitting area of their pitch or onto the one next door. Once erected it was plain the this was no medium size tent as it took up almost all the hard standing area of the pitch i.e. 22.5ft x 18ft & was almost on the grass parking /sitting area which is a further 15ft wide. This was aggravated somewhat as the guest had also brought a trailer ( a chargeable extra but for which we made no charge) in addition to their car. The car or trailer could have been put in the car park which would have freed up a lot of extra space. The shower cubicles on the main park are 5ft5in x 2ft6in by no means small but again if we had been told of a size problem we would have suggested that use was made of the new shower building on the Panorama level which has cubicles of 4ft9in x 3ft9in. The push button is there to conserve water it is simple & easy to operate & does not limit the time spent in the shower.

We found this site on the internet and thought it sounded and looked like a site worthy of a visit. We weren't disappointed, the site is lovely, spread over 3 levels with two toilet blocks. Although we did not take advantage of the service pitch facilities this is certainly something we will be looking for more of next season and when we return, as we will, we will be better prepared. Can recommend a visit to Cromer / Sheringham and many of the surrounding villages and towns, we particularly liked Holt. Although we didn't get offered the welcome cup of Tea or Coffee we had in fairness not travelled much more than a hundred miles. This adult only site is one you should definitely visit.

Have just returned from a 4 day stay at this site.Marketed as a tranquil site it is anything but.Located under the flight path of a local airfield helicopters will wake you at around 7pm and if you were hoping to catch an early night forget it a large pub/hotel opposite thumps out music until 11.30 or later.Although the facilities are well kept and clean the showers are tiny and water on a very short timer.This site is big on rules and short on enjoyment.

It is difficult to reply to this review as we cannot find a guest by this name or one with a Dorset address who has stayed here for any three, four or five nights between the 1st August &amp; 6th Sept 2010,. I can therefore only reply in general terms The park is not under any designated flight path from Norwich airport which is some 15 miles away or any other. The country inn in its own nine acres of grounds have occasional Saturday evening functions, some low level noise may be heard on a still night.. As a David Bellamy Gold conservation park we have timed regulators on a push button for showers by pushing the button several times each push adds to the length of time the water flows it is not necessary to wait until it stops. The main facility building was built some 20 years ago &amp; has undergone several refurbishments in that time the last was in 2009 the shower cubicles measure 77 inches x 30 &amp; some what wider in the new building (2009 built) at 58inches x 47 inches, neither would be considered tiny. Should any guest raise an issue with us personally we will endeavour if justified to settle it to everyone’s satisfaction. The visitor mentions the park rules as being ‘heavy‘, it would seem likely from what they write that they have been asked to comply with one or more of them, possibly after a complaint from another guest to which they have taken exception. The Park rules are there to ensure all guests have an enjoyable &amp; safe visit. We have a large number of commendations in our visitors book regrettably few of our well satisfied guests take the time to send in reviews. R A Barnes Two Mills (Adults Only) Touring Park

Used the site as a base and found it very nice. Wardens are friendly and helpful. Pitches are all serviced and Sat TV and WiFi are available at a price. Well equipped community room with books, DVDs and games. Owners friendly anjd helpful.
Slight downside was that the chemical disposal was awy from our pitch plus one toilet block had only one tolet.
Would we go there again - YES

We were new to Motorhoming and this was our first site visit for a planned tour of North Norfolk. We found the facilities far better than expected - toilets and washrooms were pristine. Reception staff were very hepful and offered us assistance with setting everything up. The site was quiet and well managed.

stayed over bank holiday. very clean and tidy site. only downside was all of the dogs barking. one in particular a large alsatain at the back of us.the caravans are very close together. not a lot to do in area. but pleasant enough.
Two Mills Touring Park

we visited here in september this year, when we arrived we was asked how far we had travelled which was about a four and a half hour trip they told us to leave the van where it was sat us down on the bench outside and made us a cup of coffee. you don't get that at every place you stop do you?this more or less set the standard for the week very clean /very quiet.very good dog walk and you can let them run off lead on the field next to the site which i though was good. the other people who stayed on site that week was exellent most of whom had 5 minutes to stop for a quick chat on there way past which i find very rare nowadays.loads of places to visit nearby
Two Mills Touring Park

visited 22nd may 2009 for 9days in caravan this is a fantastic site,we were offered tea or coffee on arrival given a tour of reception/information before being guided to our pitch. site facilities spotless well cared for grounds owners and all wardens very friendly and helpful. myself and my wife could find no fault or complaint about this site except for its a little to far from swansea five star plus. many thanks robert and angie hanford.
Two Mills Touring Park