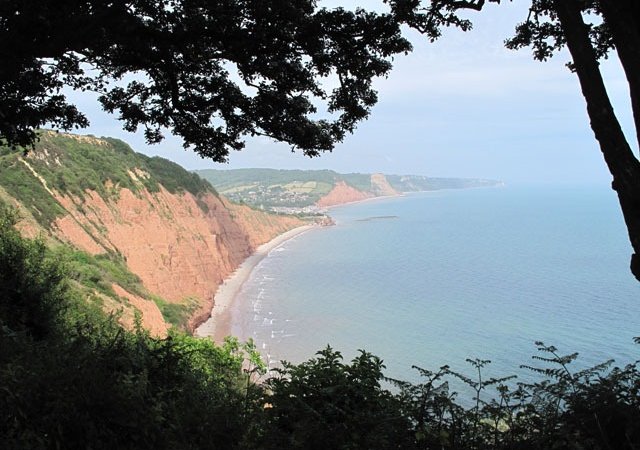 ‘Strenuous then moderate’ was how the South West Coast Path Association described the stretch of the walk I was tackling.

I was joining fundraising walkers at Sidmouth in East Devon for a morning jaunt heading west to Budleigh Salterton. The seven-mile hike was to take in Peak Hill and High Peak with further more gentle undulations along the way. ‘Gruelling then strenuous’, I felt was a more apt description by the time I puffed my way onto Budleigh Salterton’s promenade.

I met my fellow walkers under a bus shelter on Sidmouth’s esplanade. Our guide was appropriately named Mark Walker who was also a keen geologist. Helping him sweep up at the back of the line were Keith and Sylvia Wainwright. They were my constant companions throughout.

With our names ticked off, tee-shirts given out and the red hiking shoe, which was being relayed to Lands End, declared present, we were ready to start. I had come prepared with a light waterproof jacket, well broken in walking boots and a pair of walking poles I had never used before. I needed them. After dodging a few waves crashing over the esplanade, and passing the artist making paintings of the route, we climbed the steep steps at Jacob’s Ladder, away from the beach.

“See that hill in the clouds over there,” said Mark, “that’s where we’re heading.”

Cripes, that hill looked high. It was; well over 500 feet and I suffered every inch of it. Keith stayed with me, giving me lots of encouragement while I considered that if I turned around it would be downhill all the way. We stopped several times to allow my breathing to normalise. It probably didn’t help that I tried to return his friendly chat with scintillating repartee that sounded more like the last breaths of Mrs Darth Vadar. We caught up with the rest of the party, who had been waiting at a particularly lovely viewpoint overlooking the cliffs of Sidmouth. The mist obscured the finer details but it was still worth a photo.

The cliffs along this stretch of world heritage coastline are very red and are in fact Triassic rather than Jurassic so, according to Mark, we were unlikely to find any large dinosaur bones, should we go looking. The walk levelled out and I was able to keep up with fellow walkers for a chat. One couple had been walking in Nepal last year and had spent six months preparing with strenuous hikes in the UK. Apparently, the Himilayan foothills were relatively easy compared to the challenges of some British trails, he said as we comfortably skipped past Ladram Bay.

The beach at Budleigh Salterton is interesting; there is a shingle bank that separates the river from the sea. The area is famous for its fossil-bearing pebbles, which you can split open to reveal the fossil but you are not allowed to remove it from the beach. The town itself looked charming but my feet were too tired to explore.

Cuppa in the caravan or visiting donkeys? No contest!

I caught the bus back to Sidmouth (it runs hourly) where I had left the tow car and a change of footwear. By now it was the middle of the afternoon and although I was desperate to put my feet up with a cuppa it seemed a shame to return to the caravan just yet. Then I remembered that the Donkey Sanctuary was right next door to Oakdown Touring Site where I was pitched.

This was a delight. At this sanctuary alone there were around 250 donkeys; they all had names and their own tale on how they arrived here. These animals tend to pair up and develop real friendships. Apparently, if a donkey needs treatment in the hospital, its buddy goes with them to help reduce the stress. When the weather is fine the animals are let into a yard where they wander among the visitors. I spent a very happy couple of hours stroking these hugely characterful rough-haired animals – I hadn’t realized that some are quite tall.

A cup of tea and cake in the café helped replenish sugar levels and I finished the very strenuous day feeling quite relaxed.

My visit to Oakdown Touring Site was during the low season and aside from a couple of seasonal vans, I had the grove I was pitched on to myself and spent the evenings watching the sun go down and listening to birdsong and the radio with a glass of wine in hand. Bliss.

I had heard of Otterton Mill, an arts and crafts centre, also renowned for its bakery, and just a 20-minute drive from Oakdown. There has been a water mill here for almost 1000 years. It flourished during the 19th century but fell into disrepair mid-20th century. Its restoration in the ‘70s had it once again milling flour using the millstones bought in France more than 100 years before.

The setting, alongside the River Otter, is charming. The ramshackle buildings house work by local artists and craftmen and those wonderful old millstones are set to work once a fortnight. They were not performing on the day I visited but check the milling dates on www.ottertonmill.com/milling/milling-dates to see them in action and talk to the millers. I bought a beautiful Welsh throw for the caravan, and scones and bread for tea at the van later on.

The ladies on reception at Oakdown Touring Park suggested I visit Beer Quarry Caves, about four miles and 10 minutes from the site in the direction of Lyme Regis. The caves are clearly signed and there is a free car park. The caves are very cool and can be damp underfoot, so you’ll need sensible walking shoes and warm clothing if you decide to visit. You must join a guided tour to visit the caves and while I waited for the next one to start I refueled with coffee and cake and listened to the ghoulish banter of the guide, who was determined to frighten the quarry’s visitors with his stories.

It was the Romans who first began quarrying Beer Stone to build their villas and since then the white limestone has been used to construct Exeter and St Paul’s cathedrals, parts of Westminster Abbey, Hampton Court Palace and Windsor Castle. Our guide was keen to impress upon us the appalling working conditions and the magnitude of the tasks undertaken by the quarry men using first pick axes then saws to extract the beautiful stone.

The tour begins with the ‘museum’ – the first cavern, which contains the equipment used by the stonecutters and the carvers. The only light would have been from tallow candles, which the quarry men would have to buy from their wages. We were taken through the different ages of the quarry from Roman, through Saxon, Norman, and into more recent times. During that time the vast caves have been used as a hidden place of worship for persecuted Roman Catholics, contraband storage, and for growing mushrooms. The scary bit was the guide pointing out huge faults in the ceiling; the cute bit was the rows of Horseshoe bats hanging on electricity cables like macabre washing. Our guide was very good at making us understand the awesome tasks undertaken by these undervalued workers.

From the quarry I drove into Beer proper and had a wander around the town. A stream running through the town was foaming just like a pint – very apt. Beer is famous for lacemaking but what were more in evidence were art galleries, a fishing industry and row upon row of empty deckchairs waiting for tourists to arrive. Lunch on the beach at Ducky’s had to be fish and chips – delicious.

Bicton Park Botanical Gardens at East Budleigh, just nine miles from the site, had called last orders on admittance for the day by the time I arrived. I had to content myself with an evening stroll and window shopping around the attractive Regency town of Sidmouth before returning to the van to pack up for an early start the next day.

Campsites and holiday parks near Sidmouth

Here are a few to be getting on with that you can book with Caravan Sitefinder:

You can also check availability with:

You can walk the South West Coast Path at any time of year but be mindful of the weather and check the website for route changes due to coastal erosion.

Check out www.visitsidmouth.co.uk to find out more about Sidmouth.

Pick of the Best Family Holidays in France for 2022

Walking Trails: A Guide to the National Trails in North West England