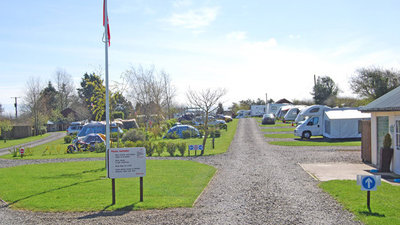 Barley Meadow Touring Park lies at the northern edge of the Dartmoor National Park in the heart of Devon. Surrounded by moorland landscapes and wooded valleys this campsite is perfect for a relaxing break.

Under brand new ownership for 2019 with a host of site improvements making this gem of a location even more special. We've totally refurbished the toilet block, added access control barriers to all pitches and general maintenance improvements across the site. A new bigger dog area too!

A small site, just 52 pitches, it caters well for all types of camper with newly refurbished toilet and shower facilities, disabled facilities, games room and a shop. There is a farm shop at the back of the site for fresh local produce too!

Take out your bikes along many local cycle routes, or catch a bus from the park entrance to Exeter, Okehampton or Bude; or pull on your walking boots and join the Two Moors Way. This popular long distance trail passes just a few hundred yards from the campsite. For a gentler stroll, pretty Drewsteignton village is a short walk away. Reward yourself with a well-earned pint at the Drewe Arms or continue on to Fingle Bridge, a local beauty spot, or Castle Drogo, England’s newest Castle.

National Trust’s Finch Foundry, the last remaining water-powered forge in England, originating from the 19th century. It was originally used to produce agricultural and mining hand tools and at its peak produced around 400 edge tools a day.
National Trust’s Castle Drogo is situated high above the Teign Gorge. It was designed by Sir Edwin Lutyens for self-made millionaire Julius Drewe. It looks ancient, but this remarkable building was only constructed 100 years ago, the last castle ever built in England.
Canonteign Falls – England’s highest man-made waterfall is a magnificent example of a Victorian folly set in a magical natural paradise. The waterfalls themselves descend for over 70m making this one of the most breathtaking attractions in Devon and providing a wonderful day out for all the family.
Fernworthy Reservoir is a great place to visit whether you want to walk, fish, enjoy a picnic or a spot of birdwatching
Stone Lane Gardens - An enchanting 5-acre woodland garden on the edge of the Dartmoor National Park in Devon, famous for National Collections of Birch trees and Alder trees and the annual ‘Mythic Garden’ sculpture exhibition
Exeter offers a mix of culture, history, places to eat and shops.

The wardens were very friendly and helpful, they gave us a choice of pitches and made sure we were happy with the pitch, then left us to it, saying if you need anything just ask. Once we were set up we took a look around the site which was extremely quite seeing as it was busy. We found the the toilets etc, which were all in excellent clean condition. Overall the site and wardens were perfect, i can't fault it.

Lovely site. We were made to feel very welcome. Spacious pitches. Excelllent toilet block. The only downside is the little shop does not accept Newspaper Vouchers for those of us who subscribe to a newspaper. This makes taking the daily newspaper expensive because we have already paid for the vouchers (which we cannot use) and have to buy the paper on the day which of course means it has been paid for twice. Many sites now accept the pre-paid vouchers. Otherwise this is an excellent site and we will definitely visit again. A very pleasant stay.

Barley Meadow site, situated just west of Exeter on the edge of Dartmoor, really is one of those hidden gems you come across from time to time – if you are lucky!
Run by franchisees Janet and Barry Payne, the site is a Camping and Caravanning Club site and is only in its second year under their stewardship.

All of the 63 pitches, of which 20 are hard standing with electric and 12 grass with electric , are set delightfully around a looping access road with the toilet block set to one side. This has all the usual facilities and, quite honestly, lacks for nothing. It includes hot power showers, electric razor sockets, parent and baby room, family shower room and disabled facilities.

The site shop has a bewildering array of items for sale including croissants and baguettes, all freshly baked each morning and still warm when you get them! Heaven!

Local attractions include Castle Drogo, the last castle to be built in England (in the 1930s, I believe!), Fingle Bridge, a delightful place for an afternoon cream tea, Canonteign Falls, the highest falls in England (allegedly), plus, of course, Dartmoor itself, the largest National Park in Southern England. Exeter is only 13 miles away along the splendid A30, which, incidentally, makes access to Barley Meadow surprisingly easy. But if you don’t want to drive (or can’t be bothered to pack everything away in your motorhome every day) there’s a bus stop right outside.

Janet and Barry really do make you feel at home from the moment you arrive partly due, I guess, to the fact that they actually own the site and it’s their business. As Barry explained to me, as I was buying some hot baguettes, they run the site with their customers at the heart of everything they do and consequently, everything is professionally done and, as ex-caravanners themselves, they know what people want from a site.

So, to sum up, Barley Meadow is a great site, run by great owners in one of the best and most picturesque parts of the country. Try it, you won’t be disappointed!
Dartmoor Barley Meadow Camping and Caravanning Club Site, Crockenwell, Devon