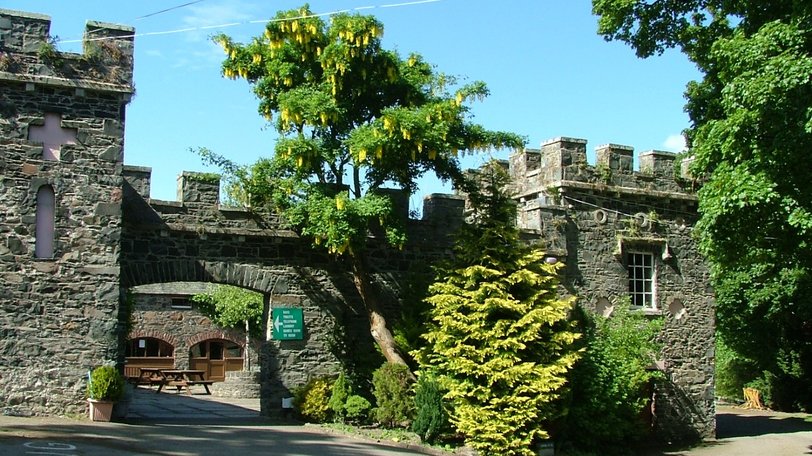 Rosetta Caravan Park in Peebles, Peeblesshire, is set within the grounds of a Late Georgian Mansion on the edge of the Town of Peebles, offering spacious and peaceful surroundings for a relaxing break. With 50 acres of land, there are facilities for Caravans, Tents and we also have Static Caravans and Holiday Lodges on site.

Peebles is in the Scottish Borders by the River Tweed and our location allows you to enjoy the unspoilt regions of the borders with hills, forests and beautiful scenery as well as some historical attractions. The town itself has everything you need for your stay with shops, cafes, restaurants and bars.

We are also 20 miles from Edinburgh, the Capital City of Scotland so you can choose to visit and take in some of the attractions such as Edinburgh Castle, The Royal Mile and Holyrood Palace.

Peebles is a busy yet picturesque market town on the banks of the River Tweed, with individual and interesting high street shops, delightful places to eat and an historic setting. The town has a pretty High Street, secretive alleyways, medieval courtyards and a wide variety of independent shops – a distinctive character that helped Peebles win the title of Top Independent Retailing Town in Scotland and place second across the UK.

I have spent the last few years staying at different touring sites around the country and i have to say that My family and I had a most enjoyable weekend on the park. The kids had a fantastic time in the games and pool room and we all enjoyed a meal in the Hayloft Bar in the evenings. the staff were all very friendly and we shall definitely be returning in the future.
Rosetta Caravan Park, Peebles, borders, Scotland

It's rare that I submit reviews like this, but I was so disappointed by Rosetta Holiday Park that I feel I have to share my
experience with others. We visited for a long weekend in June, 2009 and came away with a list of complaints.
- While the park has lovely surroundings, no care is taken in the park itself. We arrived to find drink cans on the grass,
crisp bags in a stream running through the park and sweet wrappers in the children's play area. When we left a few days later, the same litter was there, and added to.
- The facilities are very dated: the toilets and showers in particular are very grubby and unpleasant (and the water was chilly).
- While I can obviously only speak for the time we were there, we had a problem with noisy neighbours.
- Worst of all were the park staff. We went to see them about some of the above, and while they initially seemed concerned,
they did nothing and when we returned to speak with them they fobbed us off in quite a rude way.
- Other minor quibbles were the lack of recycling facilities, which is really feeble in this day and age. Also, my son noticed
that all the lights throughout the park were turned on all through the long summer days, a horrible waste of power and very
environmentally un-friendly.
Rosetta Caravan Park

This site was a great disappointment to our family. We were told by the receptionist to pitch at No.6 which was at the end of a cordoned off area due to flooding and both the caravan and the car got stuck. An owner or employee pulled us out and straightened up the caravan with his jeep. We couldn't pitch an awning because the ground was so muddy and although we tried to level off the caravan, it was useless and we were on a tilt all night. This is the only site I have been to that I wanted to leave straight away!

We were given a key for the toilet block and it was pot luck whether we could open the door or not as the lock was so stiff! The toilets were really dated and the kids commented on the amount of bugs flying about. We got up the next morning and had hitched up to leave for home by 7.45am. No way was I using their showers!

We decided to go to the clubhouse for a drink and noticed that the kids are not allowed in the bar, there is a separate area at the back for families. We were there two minutes and stood up to move when the bar staff told us to move to the back.

There appears to be a lot of tourers pitched permanently on the site. Some of them really old and covered in moss! They have cracked pavers under them and all in all it looks really untidy. One of the guys was blasting music really loud but luckily our caravan was a few hundred yards away.

We couldn't get any kind of reception for the TV there either. I presume because we were pitched under a line of trees.

The only saving grace in this site is the view when you stand at the top of the site and also some very beautiful old trees.
Rosetta Caravan Park, Peebles, Borders, Scotland

Fantastic site, altough we had a lot of rain and had to move our tent, the staff are very helpful and friendly, my boys loved the play area and we also enjoyed the bar on site, no walking into town and very child friendly too. We all had a great meal, we have already decided we will be back next year. Thank you Rosetta Staff for a wonderful holiday.
Rosetta Caravan Park, Peebles, Borders, Scotland

Not great, pitch was a quagmire, couldn't walk in awning at all. Had to be assisted on and off the pitch. Children had to be accompanied at all times to go to swing park as the site was under some development and lorries were going up and down all day. No mention of this when made booking or apology from manager when I complained. Felt like endurance test!!!Showers were ok but hair dryer was broken and no sign up to say. Will never return to this site.